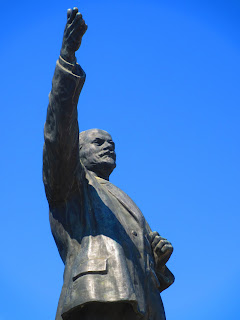 In Poland, Hungary and the Czech Republic, each country's respective communist government fell nearly simultaneously in 1989.  Although each country has since embraced capitalism, the lingering effects of communism are still felt today.  During our visits to the three countries, we toured museums, sites and memorials related to the former communist governments.  Click the link to read more. 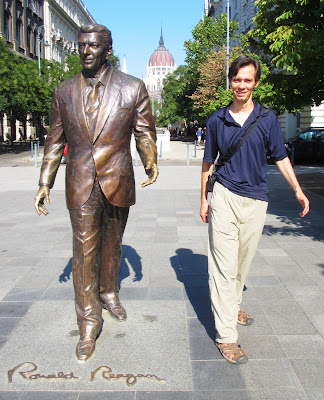 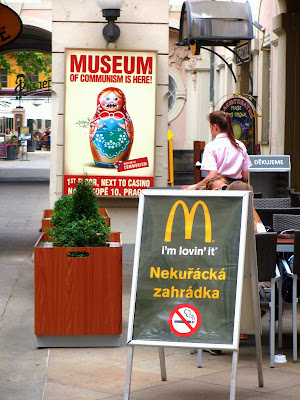 The Museum of Communism in Prague, Czech Republic is located next to a McDonald's and a casino.  Clearly, capitalism ultimately won in the Czech Republic. 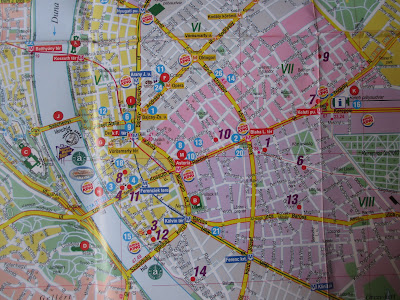 Similarly, when you go to the government-sponsored tourism office in Budapest, Hungary, you are given the above-pictured map of the city.  All the big sights in the city are noted, but not as prominently as the many Burger Kings scattered throughout the city.  Somewhere, Lenin is rolling over in his grave. 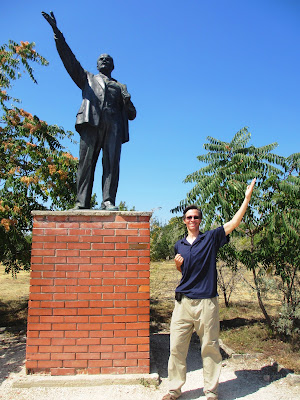 Speaking of Lenin, here's a statue of Lenin himself, one of the founders of the Communist movement, which once stood in central Budapest. 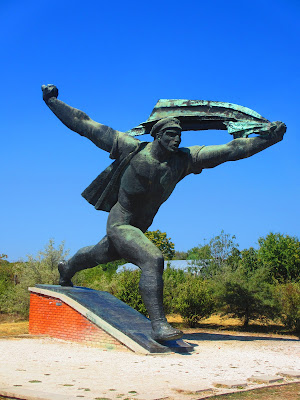 After the fall of communism in Hungary, one enterprising capitalist gathered up many of the discarded communist-era statues from the region and put them all in an outdoor museum and began charging admission.  Above is a statue meant to show a communist worker running to victory; unimpressed Hungarians used to refer to it as a bathhouse attendant running after a customer who forgot his towel. 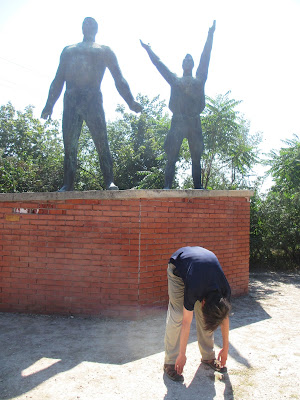 Above are statues of Communist workers who appear to me to be performing calisthenics. 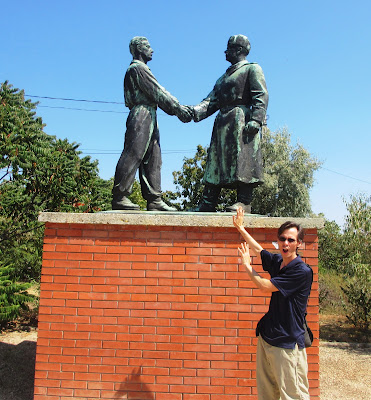 This is a statue of a Hungarian worker happily greeting a Soviet soldier, who will offer the worker the gift of a communist regime.  I am imploring the worker to return the gift unopened. 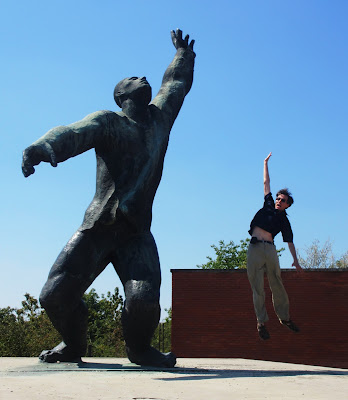 Above is a statue of a worker who is either nobly dying for the communist cause, or he is reaching to give me a "high five." 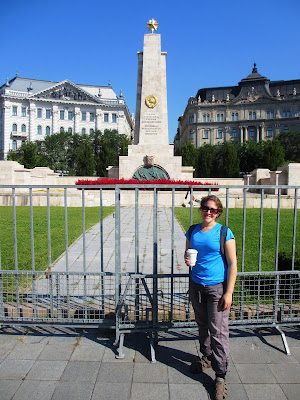 Budapest's last tribute to communism still standing in a public square is the above-pictured monument to fallen Soviet soldiers in World War I.  However, the former Soviet Union is so unpopular in Hungary that the authorities had to erect barriers around the monument to stop vandals from defacing the intensely unpopular hammer and sickle image.

As a further message signifying the current regard for communism and the former Soviet Union, the Hungarian government erected the above-pictured statue of Ronald Reagan in 2011, which stands just behind the monument to WWI Soviet soldiers.  Reagan is quite popular in Hungary, Poland and the Czech Republic, where he is credited with helping bring about the collapse of communist governments in 1989. 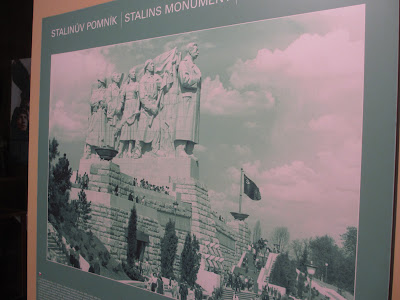 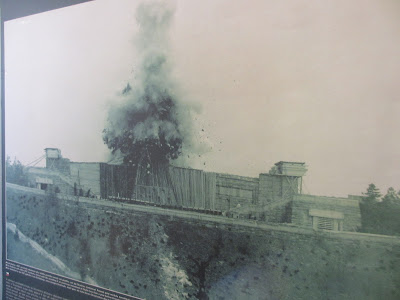 Most of the Communist-era statues erected around Central Europe have been destroyed.  For example, the first photo above from Prague shows what was once the largest group statue in Europe, featuring Stalin in the front.  After Stalin's crimes were made public, the statue was destroyed in 1962. 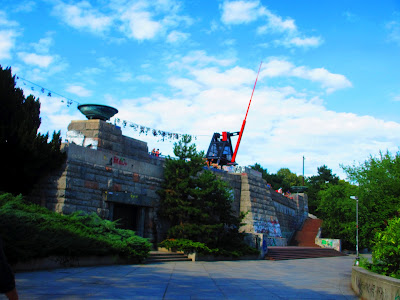 After the fall of the Communist government in 1991, the Czech Republic erected a giant working metronome where the Stalin statue once stood.  Behind the metronome is a popular area for skateboarders, who refer to "skating at the Stalin." 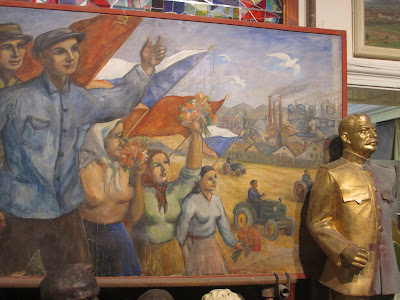 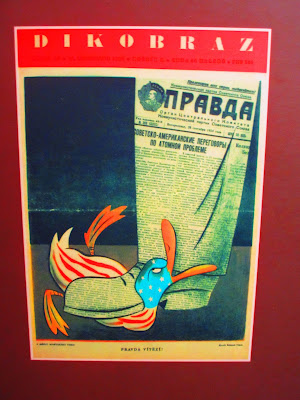 In museums, we saw many example of communist-era propaganda meant to idolize the Worker who serves the Communist Party and denigrating the United States (above represented by a squawking duck in need of a foot to the neck). 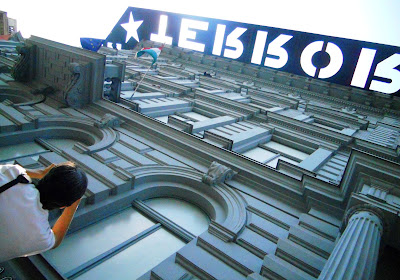 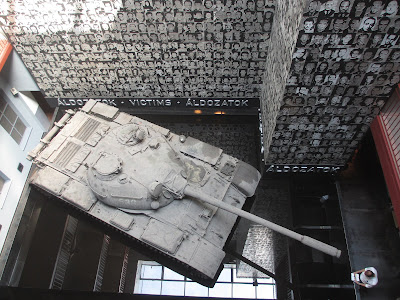 Despite the communist-era propaganda, for many who lived under the communist regimes in Central Europe, the experience was terrible.  Above are photos taken at the House of Terror Museum in Budapest.  The museum is housed in a building that once was the site of imprisonment and torture by the Hungarian Arrow Cross (counterparts to the Nazis) in World War II and then the Communist AVH (the Hungarian version of the KGB) during the communist regime.  The bulk of the exhibits detail the spying, interrogation, torture and murder inflicted upon Hungarian civilians during the 40-year communist regime. 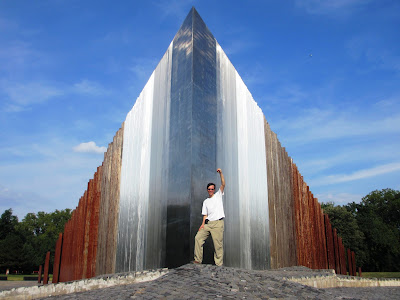 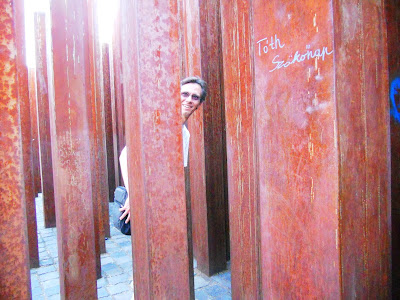 We heard a lot about the former communist regimes during our travels in Central Europe.  Among the more memorable comments we heard:  "Under Communism, they pretended to pay us; we pretended to work."  "Under Communism, Christmas came once a year.  Now, it's like Christmas everyday."  (That comment refers to the scarcity of even basic supplies during communism, as compared to the wide availability of goods now.)

We heard one refrain a number of times: under Communism, there was a scarcity of goods, but people never worried about unemployment and they always had plenty of free time to chat over coffee because no one worked very hard.  Conversely, under Capitalism, people now have many fancy goods, but have to work long, hard hours and have far less free time for socializing.  This can best be summarized by the following quote: "Under Communism, we had money but nothing to buy; under Capitalism, we can buy anything, but have no money."  At the end of the day, everyone we heard from seemed happy that Communism fell, even if they did look back with a tinge of nostalgia.  But who is immune from indulging in nostalgia from time to time?
Posted by Jason at 9:54 AM

Email ThisBlogThis!Share to TwitterShare to FacebookShare to Pinterest
Labels: Communism