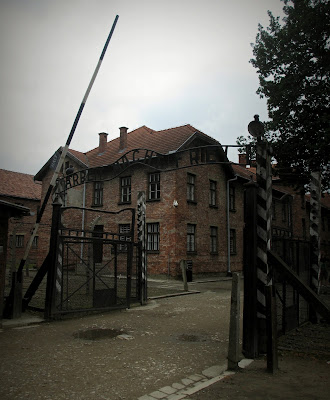 During our time in Central Europe, we visited numerous memorials and sites related to the darkest event of the 20th Century: the holocaust.  The holocaust sites we visited included Auschwitz concentration camp in Poland, Terezin work camp in the Czech Republic, Oscar Schindler's factory in Krakow, Poland, and holocaust memorials and museums in Budapest, Prague and Vienna.  The holocaust deeply scarred the populace of the entire region, and each place has its own way of honoring the victims and remembering the crimes in hopes that they are never repeated. 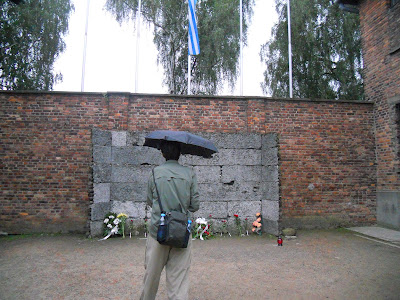 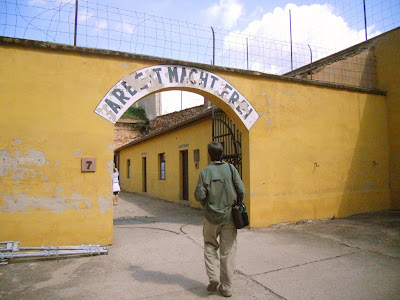 We first visited Terezin Concentration Camp, through which approximately 150,000 Czech Jews were transported.  The infamous words, "Arbeit Macht Frei" ("work makes free") are written above the door as I walk into the entrance to the Terezin prison complex.

Terezin's primary purpose in the Nazi scheme was one of deception.  Hitler, the world was told, had built a city for the Jews in Terezin, to protect them from the stresses of the war.  A film was made to show this mythic, idyllic city.  In the film, newly-transferred Jews (so they had not yet been visibly starved) were shown playing soccer, attending classes, engaging in artistic activities, and otherwise living a normal life.  In reality, Jews who would not enthusiastically participate in the filming were summarily executed.  On June 23, 1944, the Nazis permitted a visit to Terezin by representatives from the International Red Cross in order to dispel rumors about the extermination camps.  To minimize the appearance of overcrowding in Terezin, the Nazis deported many Jews to Auschwitz.  Also deported were most of the Czechoslovakian workers assigned to 'Operation Embellishment,' which spruced up the concentration camp to look like a functioning town.  (The photo above shows the main town square, which looks similar to how it did when the Red Cross visited.)  They erected fake shops and cafes to imply that the Jews lived in relative comfort. 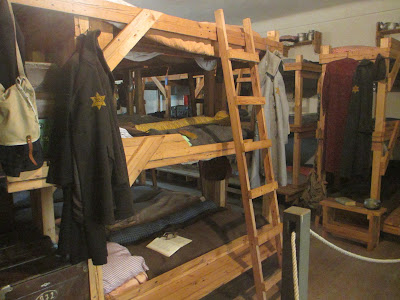 Above is a photo of the bunks where the Jewish inmates lived. 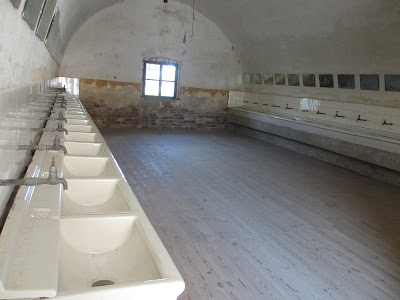 The inmates were forced to build communal washrooms such as that pictured above.  The Red Cross was then shown these clean washrooms to show the humane living conditions.  Unfortunately, the Red Cross representatives did not bother to examine the washrooms very closely.  None of the pictured faucets were ever attached to water pipes; they were erected purely for the purpose of deceiving the Red Cross.  After the visit, the Red Cross filed and publicized a report indicating that conditions in Terezin were acceptable and humane.  Of the approximately 150,000 Jews who passed through the gates of Terezin, only 17,247 survived the war. 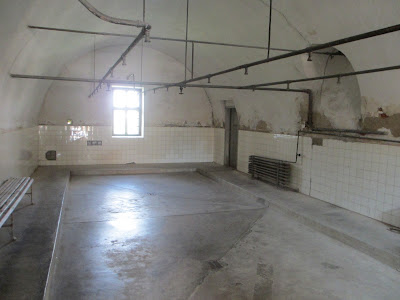 Above is a photo of the communal shower room in Terezin.  Whereas the previously-pictured washroom was designed to deceive the Red Cross inspectors, this room was meant to deceive the Jews.  It was meant to make the Jews accustomed to the idea of showering in rooms such as this.  Later, when they were told to go to the gas chambers disguised as showers in the extermination camps such as Auschwitz, they would be less likely to revolt.  Historians believe that the vast majority of Holocaust victims, prior to deportation to the extermination camps, were either unaware of the fate that awaited them or were in denial--they believed the lies they had been told that they were simply to be resettled. 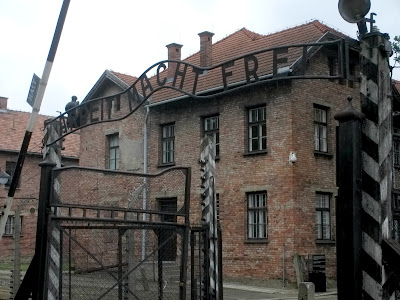 Auschwitz is the name for the network of concentration and extermination camps built near the town of Oswiecim in Poland.  Above is a photo of the iron gates of Auschwitz, crowned by the motto, Arbeit Macht Frei ("work makes free"). 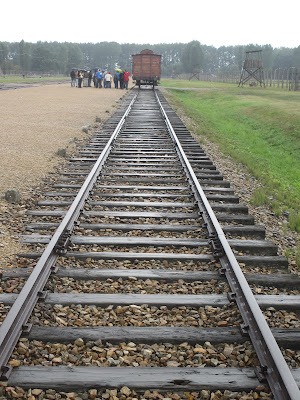 By July 1942, the Nazis were conducting the infamous "selections" in Auschwitz (and other camps), in which incoming Jews were divided into those deemed able to work, who were sent to the right of the above-pictured rail tracks and admitted into the camp, and those who were sent to the left and immediately gassed.  Prisoners were transported from all over German-occupied Europe by rail, arriving in daily convoys.  The SS forced an orchestra to play as new inmates walked towards their "selection" and possible extermination.  (The musicians had one of the highest suicide rates of anyone in the camps.)  The group selected to die, about three-quarters of the total, included almost all children, women with children, all the elderly, and all those who appeared on brief inspection by an SS doctor not to be completely fit.  SS officers told the victims they were to take a shower and undergo delousing.  The victims would undress in an outer chamber and walk into the gas chamber, which was disguised as a shower facility, complete with dummy shower heads.  After the doors were shut, SS men would dump in the cyanide pellets via holes in the roof or windows on the side.  In Auschwitz, more than 20,000 people could be gassed and cremated each day.  Approximately 1.3 million people were killed in Auschwitz; 90% were Jewish, and the rest included Poles, Soviet prisoners of war, Roma gypsies, homosexuals, the disabled, and Jehovah's Witnesses.  In total, approximately six million European Jews (including one million children) were killed in the Nazi genocide; approximately 5-11 million people in other groups (primarily Soviet and Polish civilians) were also killed by the Nazis in non-combat deaths. 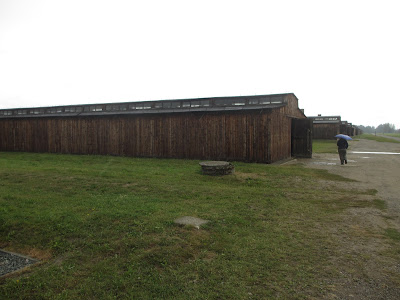 The first photo above shows some of the housing units at Auschwitz.  The second shows a former gas chamber, destroyed by the Nazis as they evacuated the camp at the end of the war. 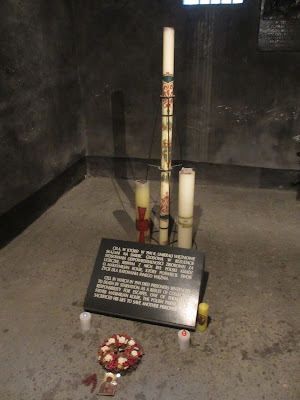 Above is a photo of the Auschwitz cell which housed Polish priest Maximillian Kolbe.  During World War II, Kolbe provided shelter to refugees from Poland, including 2,000 Jews whom he hid from Nazi persecution in his friary.  In 1941, he was arrested and transferred to Auschwitz.  Later, three prisoners disappeared from the camp, prompting the deputy camp commander to pick 10 men at random to be starved to death in an underground bunker in order to deter further escape attempts.  When one of the selected men, Franciszek Gajowniczek--a stranger to Kolbe--cried out, "My poor wife! My poor children! What will they do?"  Kolbe offered himself instead, purportedly saying, "I am a Catholic priest from Poland; I would like to take his place, because he has a wife and children."  The switch was permitted.  After two weeks of dehydration and starvation, the guards opened the cell shown above to find the nine others dead while only Kolbe remained alive.  The guards gave Kolbe a lethal injection of acid, and Kolbe finally died.  Gajowniczek and his wife survived the concentration camps, although their children did not.  In 1982, Gajowniczek--who lived until 1995--was a guest of Pope John Paul II when he canonized Kolbe as a martyr. 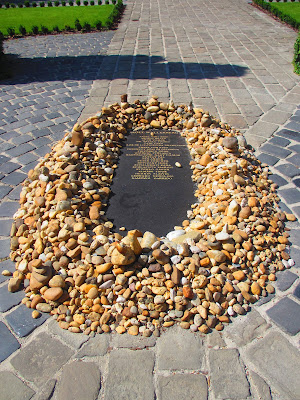 This is a memorial in Budapest to Swedish architect and diplomat Raoul Wallenberg, who, while serving as Sweden's special envoy in Budapest in 1944, issued protective passports to Hungarian Jews and sheltered Jews in buildings designated as Swedish territory.  He is credited with saving the lives of up to 100,000 Hungarian Jews.  Wallenberg, who studied at the University of Michigan, was accused of being a spy for the United States, and was arrested by the Soviets in 1945 and was never seen again.  In 1981, U.S. Congressman Tom Lantos, himself one of those saved by Wallenberg, sponsored a bill making Wallenberg an honorary citizen of the United States.  He is also an honorary citizen of Canada, Hungary and Israel.  A postage stamp was issued by the U.S. in his honour in 1997.  On July 26, 2012, he was awarded a Congressional Gold Medal by the U.S. Congress. 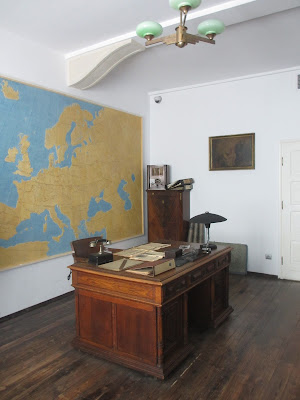 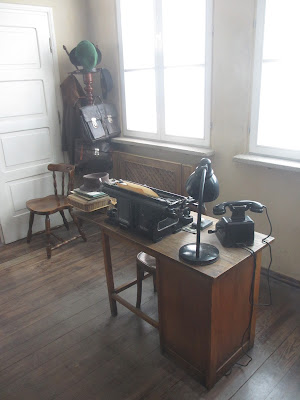 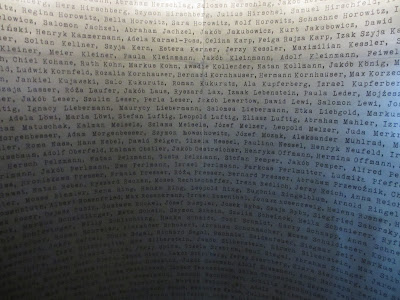 The above photos were taken at the factory which was owned by Oskar Schindler, a German businessman who is credited with saving over 1,100 Jews during the Holocaust by employing them in his enamelware and munitions factories, which were located in Poland.  As detailed in the movie, Schindler's List, Schindler first joined the Nazi party and sought to profit from the German invasion of Poland, but later worked with his Jewish account, Itzhak Stern, to shield as many Jews (including women, children and the handicapped) as possible from the Nazi death camps by claiming that they were essential to his business.  As a businessman, Schindler was an abject failure--he went bankrupt repeatedly before and after the war and died penniless--but he succeeded when it mattered the most.  At his request, Schindler was buried in Jerusalem.  The above photos show Schindler's and Stern's desks at the factory during the war, and a list of the names of the people Schindler saved. 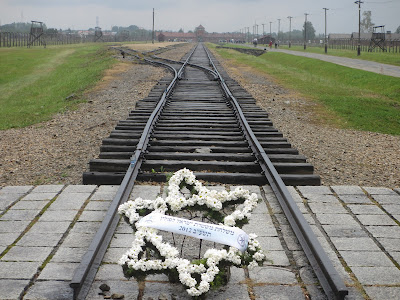 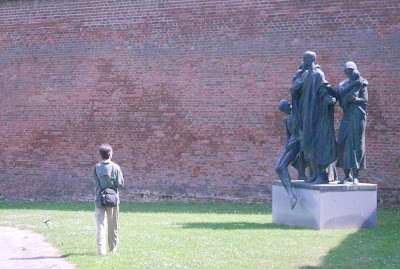 We visited many memorials to victims of the holocaust, such as those pictured above at Auschwitz and Terezin.  As of 2010, over 29 million people had visited the Auschwitz memorial site. 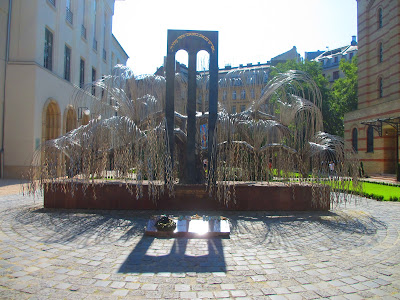 In the courtyard of the Dohany Street Synagogue, the largest synagogue in Europe and the fifth largest in the world, sits the above-pictured Memorial of the Hungarian Jewish Martyrs.  At least 400,000 Hungarian Jews were murdered by the Nazis.  The memorial resembles a weeping willow, whose leaves bear inscriptions with the names of the victims. 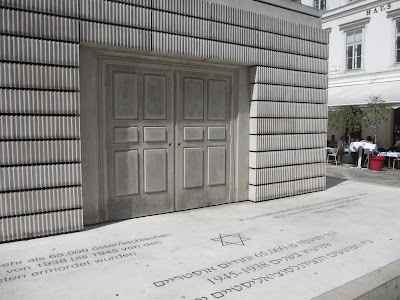 Above is a photo of the Judenplatz Holocaust Memorial in Vienna. 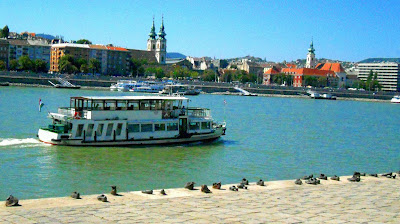 As Raoul Wallenberg was working to save the Hungarian Jews from the Nazis and their Hungarian allies, the Arrow Cross, Jews were being systematically killed on the banks of the Danube River in Budapest.  The above-pictured memorial, which consists of bronze shoes on the bank of the river, honors the Jews who were killed by the Arrow Cross in Budapest during World War II.  The Jews were ordered to take off their shoes, and were shot at the edge of the water so that their bodies fell into the river and were carried away.  The memorial represents their shoes left behind on the bank. 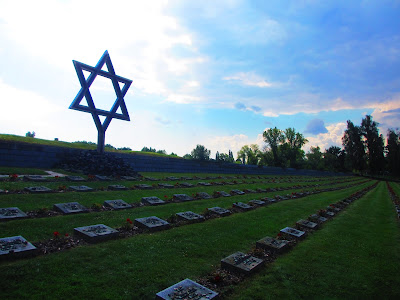 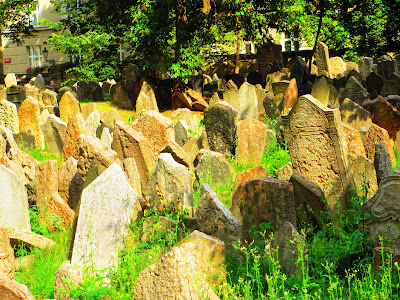 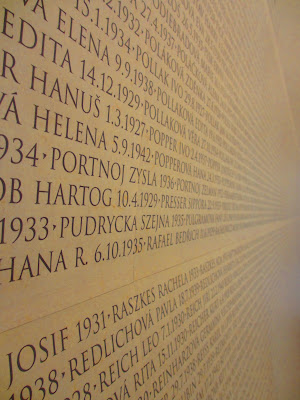 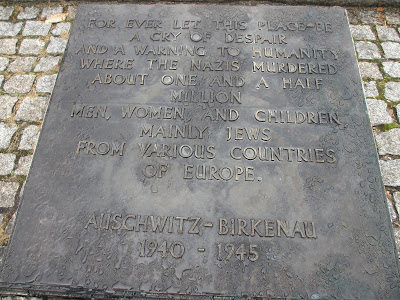 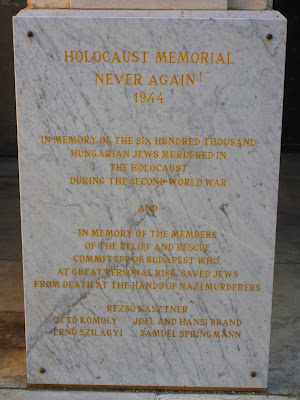 It is difficult to revisit the horror of the holocaust.  But taking time to remember the holocaust is important both to honor the victims, and, as the sign below states: 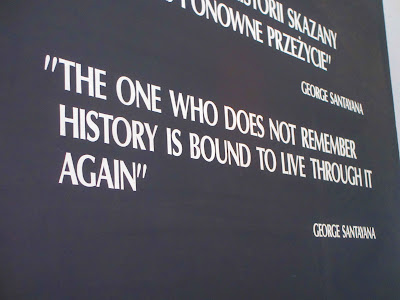