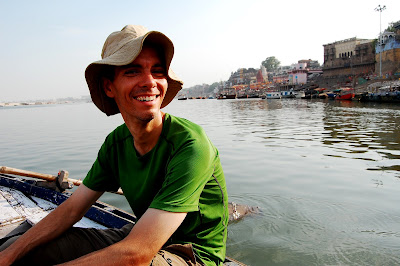 We visited ten cities during our visit to India, and transporting ourselves between and within these cities proved to be an adventure.  The streets, rivers and rails of India are often chaotic, noisy, full of vehicles, pedestrians, cattle, dogs, and goats.  Around every corner seem to be perils, both petty and serious, as well as unexpected treats.  After a short time, if you are open to it, the chaos almost magically transforms into a beautiful ballet, full of intricate movement and vivid color.  The everyday scenes flashing by seem to encapsulate the entire experience of life in a whirlwind of sights, sounds and smells.  It's tough to capture that with a camera, but click the link to see a few of my videos and photos related to transport in India. 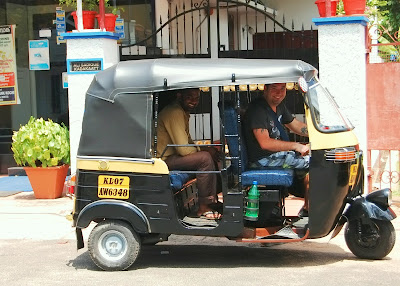 Auto-rickshaws, also known as tuk tuks, autos or tricycles, are common throughout India as well as Southeast Asia.  They are three-wheeled vehicles that have the advantage of being able to squeeze through India's crowded city streets.


We took dozens of rides in auto-rickshaws.  Above are some videos taken while we were riding in auto-rickshaws in Agra, Jaipur and Varanasi (in that order, with the last two from Varanasi).  Together, the videos give a fair impression of what the streets are like in India: chaotic at first, but strangely ordered after awhile.  If you take the time to watch them, and keeping in mind that it was 117 degrees outside when the video was filmed, you will likely sympathize with Beth's statement in the last video that she is planning to take a total of five showers that day.
In India, even more than the other countries we have visited, things do not always go as planned and improvisation is required.  For instance, the auto-rickshaw carrying Shane and Nick from the train station in Jaipur ran out of gas before reaching our hotel.  As shown in the above video, the driver of the auto-rickshaw carrying Beth and I pushed the stalled vehicle the final few blocks to our hotel using his foot!

India is a huge country, and a few times we encountered drivers who would claim to know our destination in order to get our fare, only to then stop repeatedly to ask for directions from people on the street.  The first video above shows one of approximately 15 times our driver stopped to ask someone for directions during our three-hour ride.  The second video, taken a few days after the first, shows us bailing out of a rick-shaw when it becomes clear our driver did not know where our hotel was. 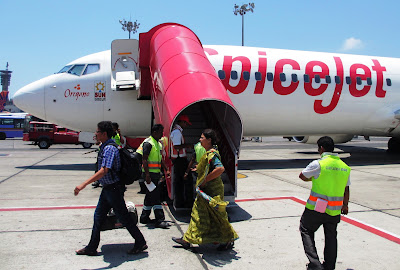 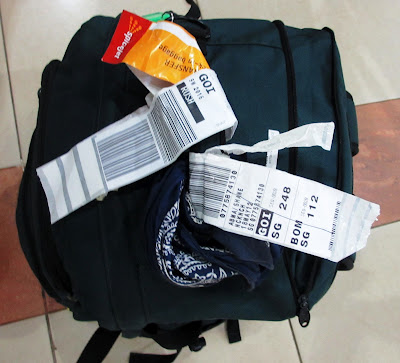 Things not going as planned was not limited to road transport.  We took five flights in India on five different airlines.  On SpiceJet, where every plane is named after a spice (we flew on "oregano" and "paprika"), our bags arrived at our destination many hours after we arrived.  The SpiceJet tag on our bags said, "rush" (see photo above); imagine how long the bags would have taken without that tag!   On Air India, our flight was canceled due to a pilot's strike.  But like most things in India, although they may not go as planned, they seem to work out well in the end.  We thoroughly enjoyed our extra day in Varanasi caused by the flight cancellation. 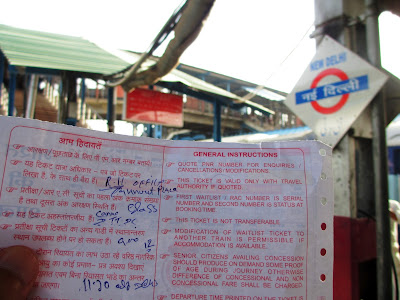 Sometimes it is not an accident when things do not go as planned.  India is soon to be the most populous country on earth, so perhaps it should not be surprising that India has many less-than-scrupulous fellows operating in the transport field.  The first photo above shows the back of my train ticket from Delhi to Agra.  When we entered the Delhi train station 30 minutes before the scheduled departure time of our 8:00 am train, an official-looking and official-sounding man approached us and asked to see our tickets.  He looked at my ticket and told us that the 8:00 am train to Agra was cancelled, and he pointed to the large departures board above the train station entrance.  Sure enough, the 8:00 am Agra train was not listed where it should have been on the board.  We started to head to the tourist information office where we had purchased our tickets two days earlier, but he pointed us to the sign on the door of the office which said the office was closed and would not open for three hours.  Then he took out a pen and wrote on the back of my ticket.  He said we needed to take an auto-rickshaw to the address he had written and purchase a new ticket for a 9:30 am train to Agra and seek a refund for our 8:00 am train ticket.  He said if we hurried, we could make the 9:30 am train, which was the last one of the day.  We conferred amongst ourselves and decided we would go to the platform where our tickets said our scheduled 8:00 am train would depart.  When we started walking, the helpful guy said we were going the wrong way and were risking missing the last train of the day.  We ignored his protests.  As we walked to the platform, another well-dressed guy approached and asked to see our tickets.  He told us the same thing as the previous guy.  We walked to the platform anyway, ignoring a few other guys who also asked to see our tickets.  The above video was taken as we ignored these last guys, who can be heard chasing after us, saying, "hello!"  When we reached the platform after a 20 minute walk (it's a big station), our train number was listed on the departure board by the platform, and we boarded the 8:00 am train, which departed as scheduled. 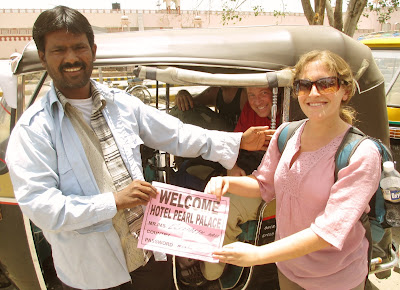 One of the most common tactics of unscrupulous taxi and auto-rickshaw drivers is to ask which hotel you would like to be transported to, and then tell you on the way that the hotel is full, or bad, or burned-down, and then try to steer you toward a purportedly great hotel which also happens to pay the driver commission for bringing customers.  More sophisticated drivers have a contact in the city you just departed (such as a hotel front desk employee or a taxi driver), who asks where you are going and which hotel you will be staying at.  Then the contact phones the driver in the arrival city, who writes your name on a sign or otherwise pretends to be from your hotel.  Because the driver knows your name and hotel, it makes it seem very plausible when he tells you the hotel you had reserved is full/bad/burned down, and you'll have to go to a "partner hotel."  To combat this scam, the Hotel Pearl Palace gives its customers a password, which is only known by the customer and the driver, and the customer is told to only trust a driver who knows the password.  In the photo above, you can see the password written on the bottom of the sign.  At times, it seemed more like we were meeting an agent with the CIA, rather than just getting a ride to a hotel. 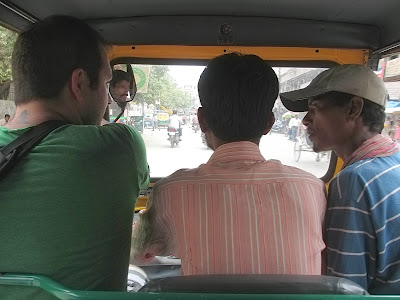 Touts for hotels and stores are common in India, and they often approached us when we walked along the streets and even when we took auto-rickshaw and taxi rides.  The above photo shows a man to the driver's right (the driver is in the middle), who hopped on our rickshaw during our ride and tried to convince Nick (on the left in the photo) to go to a souvenir shop.  The two videos above show touts approaching us as we walk amid the chaotic streets of Varanasi. 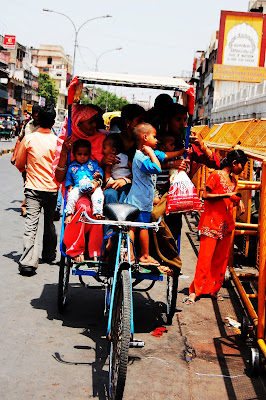 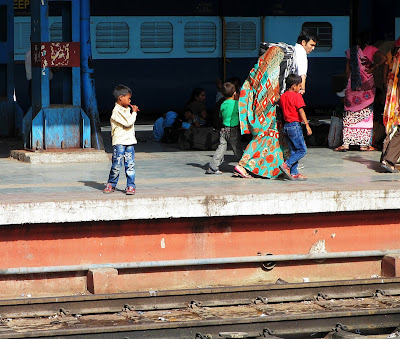 India is on pace to soon be the most populous country in the world, and it certainly is not the place to go to get some alone time.  This is apparent anytime you venture out onto the streets or any public place.  The last photo above show a child brushing his teeth and spitting onto some train tracks.  This is the mildest instance of someone using a public place as a bathroom.  I saw dozens of people peeing on the streets and the railway tracks, and I saw at least four people pooping in public, including one girl who pooped onto the pictured train tracks while standing on the platform. 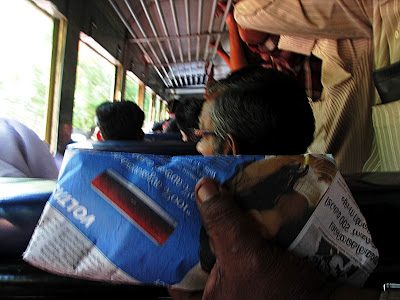 The above photo was taken during a bus ride in southern India.  The bus was packed, with every inch filled with people, and passengers hanging out the doorways.  I was in an aisle seat, and both the back and front of my head was hit repeatedly by arms, elbows, bellys, rear ends, and even crotches.  The pictured hand, which was only a few inches from my face as I took the photo, was holding raw fish wrapped in a newspaper.  I know this because it hit my face a few times, giving me plenty of opportunity to identify the smell. 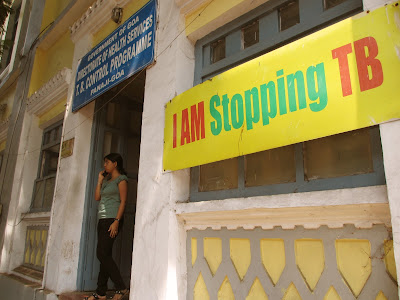 During the same bus ride, someone kept coughing on the back of my neck.  For an hour, the incessant coughing continued.  Then, I could tell from the flurry of strained movement behind me that the cougher was squeezing his way out of his seat and off the bus.  I breathed a sigh of relief that the cougher was leaving, until I saw the building next to the bus stop where he disembarked: the tuberculosis control office of the department of health services.  At that moment, I seriously considered gargling Purell!  On the return bus ride, Beth and I both had to stand for three hours on a crowded bus ... and that qualified as the more pleasant of the two rides. 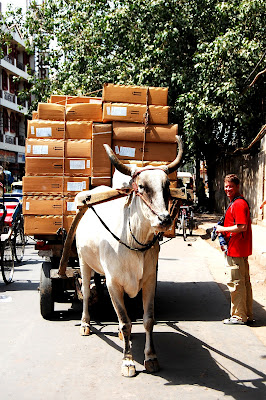 This has to be one of the oldest forms of transport in the world: an animal pulling a cart.  And what is this animal pulling?  Flat-screen TVs! 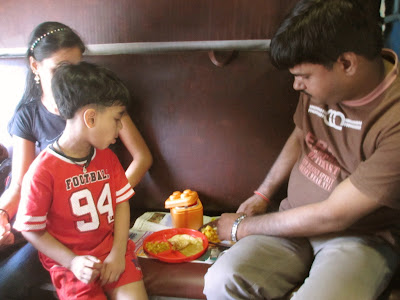 More often than not, our transport experiences in India were like the one we experienced above on a train from Ranthambore National Park to Jaipur.  At first, this family, whose bench seat was a mere three feet from our bench seat, was making my train ride one to forget: the pictured boy was yelling, running around the train car, hitting my leg repeatedly, and when he finally settled down, it was to loudly eat some smelly food.  But then, as we were getting exasperated, Nick rooted around in his bag and found a green toy action figure that he once used in his job as a healthcare recruiter.  He gave the toy to the kid, who became fixated on it.  Then, Nick used his iPad to display animal photos to the kid, and ask him what each pictured animal was called in English.  The kid immediately settled down and focused on the impromptu English class.  His parents clearly were happy to have someone else occupy their son's attention for a couple of hours, and after a while, they also began participating in Nick's class, calling out hints to their son. 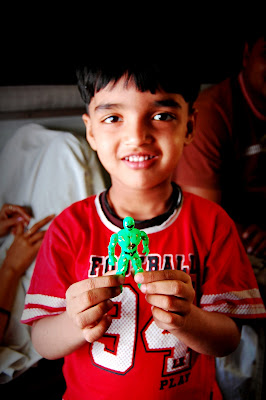 Like so many of our transport experiences in India, what had the potential to be a negative experience ended up being a positive one.  That, in a nutshell, is the wonder of India.
Posted by Jason at 7:00 AM

Email ThisBlogThis!Share to TwitterShare to FacebookShare to Pinterest
Labels: India