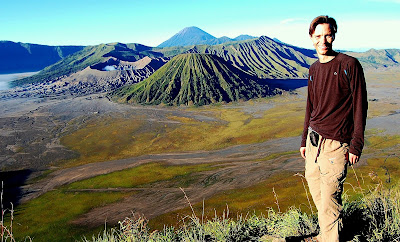 Java boasts many wonders beyond the temples discussed in my previous post. Click the link to read about our visit to the three smoking volcanoes pictured above, as well as two vibrant Javanese cities, Yogyjakarta and Surabaya. 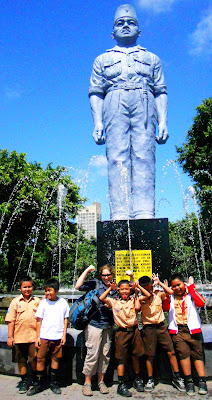 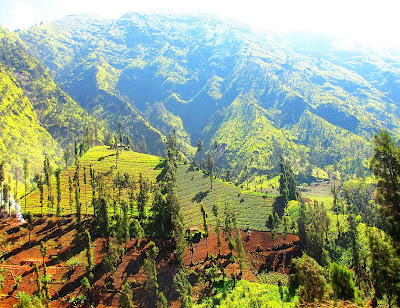 The island of Java has the most volcanoes of any island in the world. The presence of a volcano typically means that the surrounding land is especially fertile, and Java is no exception. During our drive to Mount Bromo National Park, we saw lush green landscapes at every turn. 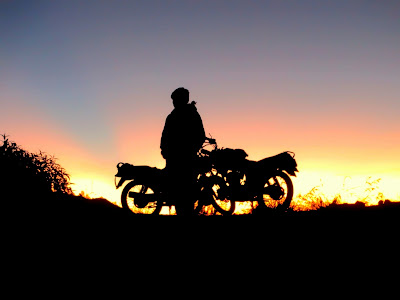 We hiked up to a viewpoint before dawn in hopes of catching sunrise from the viewpoint. Along the trail to the viewpoint, locals with dirt bikes offered the panting tourists a ride to the top for a fee. Beth and I held out and walked the whole way; Nick walked a couple of miles and then decided the ride was worth the $2 asking price; Shane skipped the hike entirely, saying he would just look at our pictures when we returned at breakfast time.

The first photo above is the view just after sunrise, and the second photo is the view from a little lower elevation about 30 minutes later. Although the region is generally known as Mount Bromo, there actually are three distinct volcanoes visible in the photos. Two of the volcanoes are still active, and both emit plumes of smoke every 20 minutes or so. Smoke is visible inside the caldera of Mount Bromo in the bottom photo. 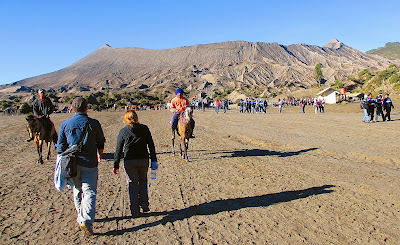 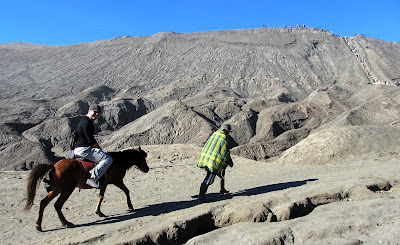 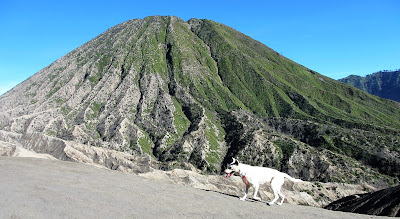 After descending from the viewpoint, Beth, Nick and I headed down to the "sea of sand" at the base of the volcanoes. We were repeatedly offered horse rides up to the stairs leading to the crater rim of Mount Bromo, as pictured in the first photo above. As before, Nick decided to support the local economy, while Beth and I chose to walk with the dogs. 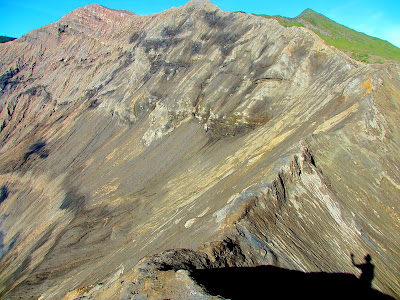 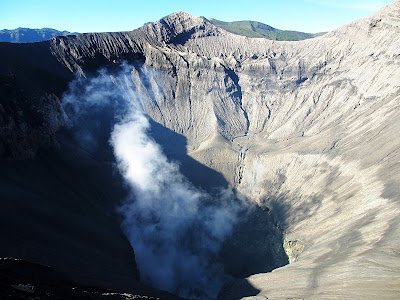 When we reached the crater rim and witnessed the smoke belching from deep within the volcano, we agreed that the walk was well worth the effort. 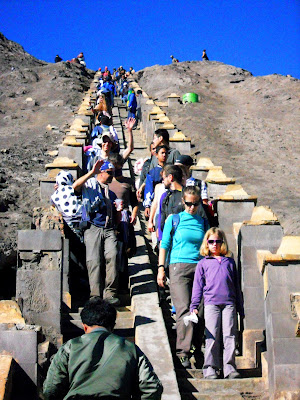 By the time we descended from the rim, you can see that we were not alone on the mountain. If you look closely, you can spot me waving.


After surviving our encounter with the steaming volcano, we decided to let off a little steam of our own, as shown in the above video. 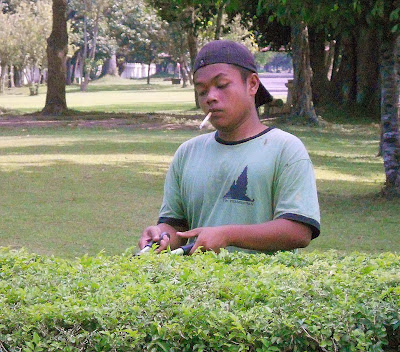 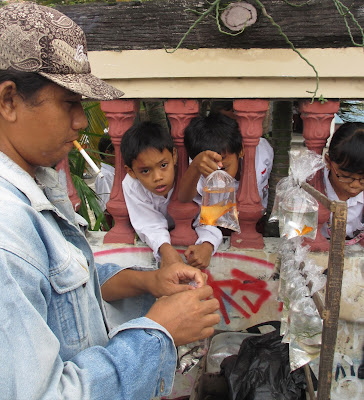 Sadly, the many volcanoes aren't the only things in Indonesia which constantly smoke. One third of all Indonesians above the age of 10 smoke an average of 12 cigarettes a day. Unlike most other governments in the world, Indonesia does not require cigarette health warnings or impose any special taxes on cigarettes, keeping the price of a pack of cigarettes at less than $1. By contrast, neighboring Malaysia taxes cigarettes and requires shockingly-graphic color photos of damaged lungs, gums and fetuses on all boxes of cigarettes. Not surprisingly, Malaysia has a far lower rate of smoking. Meanwhile, we read about a medical clinic in Indonesia's capital, Jakarta, where doctors actually prescribe cigarettes to patients for the treatment of a variety of ailments and conditions, including emphysema, autism, and even lung cancer. 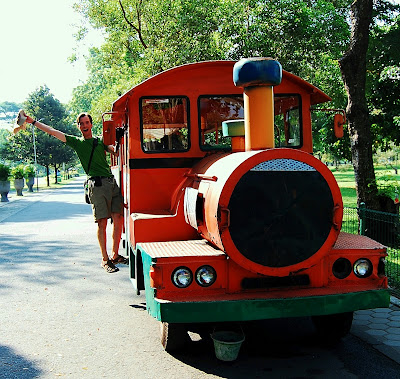 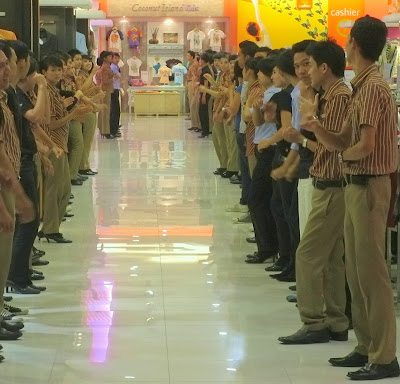 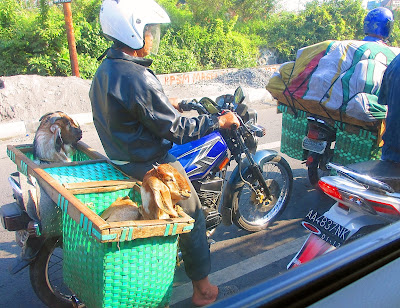 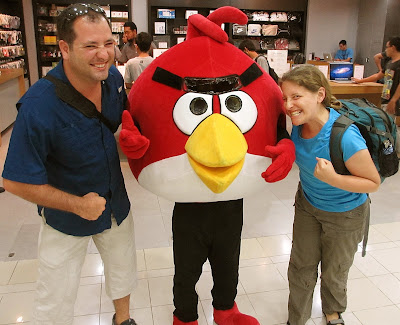 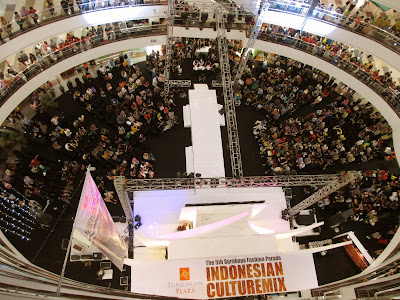 Our time in Indonesia was punctuated by a variety of quirky sights, some of which are shown above: a random train-car, a group of department store employees clapping and singing before work, a couple of goats enjoying a motorcycle ride, an angry bird and two angry tourists, a fashion show in the middle of a shopping mall, and a fellow (with a cigarette dangling from his lips, of course), selling goldfish to school children through the schoolyard fence. 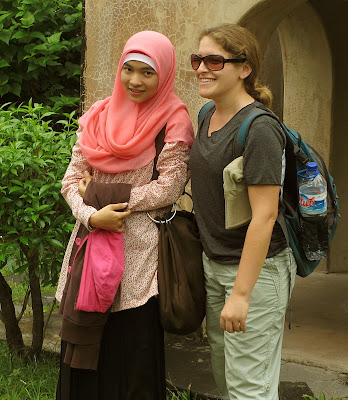 As has been the case throughout Southeast Asia, people asked us to pose for photos. Not surprisingly, they usually asked Beth to be the model and they usually handed me the camera to snap the photo. 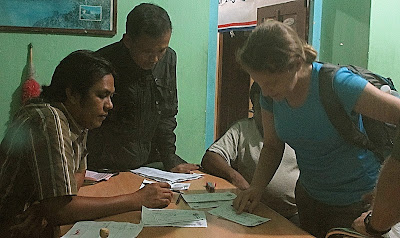 Thanks to Beth's two years in the Peace Corps in East Timur, Beth speaks Indonesian and Malaysian (as well as three other languages), a skill which came in very handy throughout our travels in Indonesia and Malaysia. 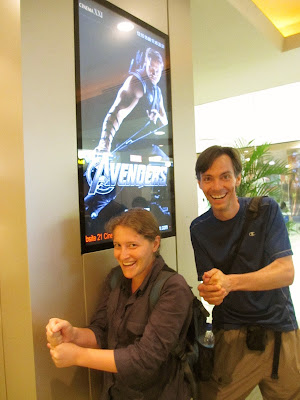 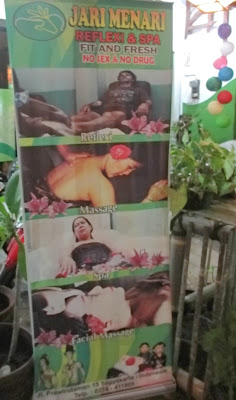 We treated ourselves well in Java, enjoying a $3 movie on one afternoon (with salty popcorn!), and a $4 massage (and good, too!) on another. 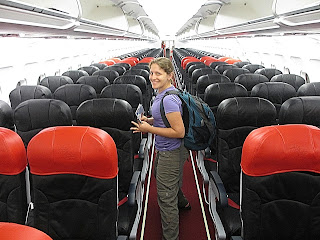 The massage was especially welcome after our flight experience in Java.  Over the past few months, we've seen flight delays for a number of reasons (including this line from a gate agent, "Oh no, the plane is not late.  The plane is on time.   It is only the pilot who is late."), but Java was the first time we've experienced a delay in take-off for over an hour due solely to a screaming baby. Above is a video taken as we sat on the tarmac during the crying-baby-delay. 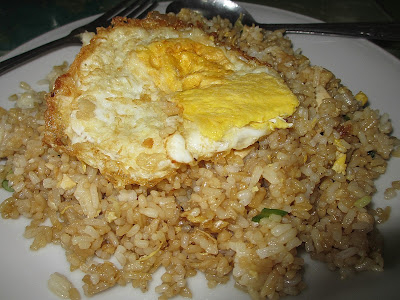 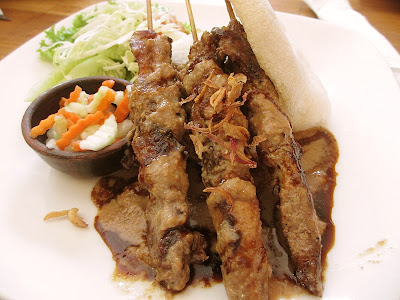 Above are two staples of Indonesian cuisine: nasi goreng (aka, fried rice with a fried egg on top), and chicken satay.  We enjoyed our share of these dishes during our time in Java. 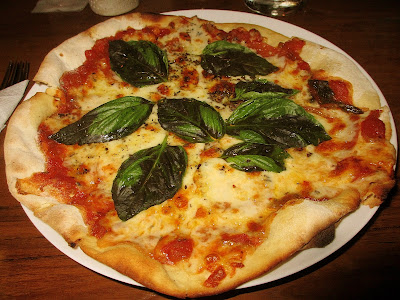 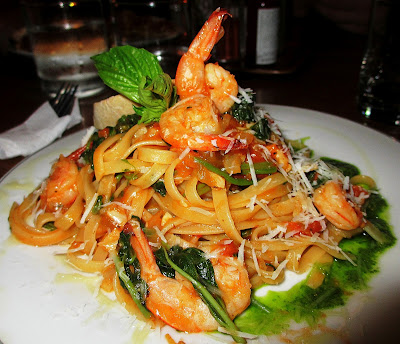 However, two of my favorite dishes during our visit to Java were the two Italian dishes pictured above. 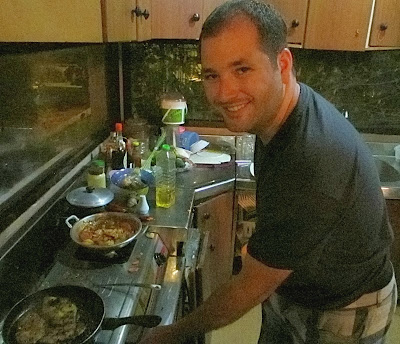 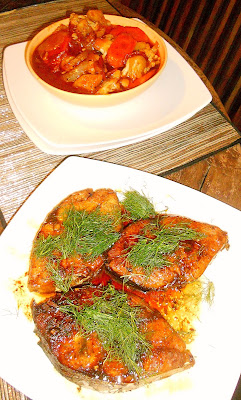 And my favorite meal in Java wasn't cooked by an Indonesian.  That meal was cooked in the kitchen of our Yogyjakarta homestay by our own chef extraordinaire, Nick.  Sometimes you have to eat food from all around the world to realize that the best cook has been sitting right next to you the whole time.
Posted by Jason at 5:00 AM