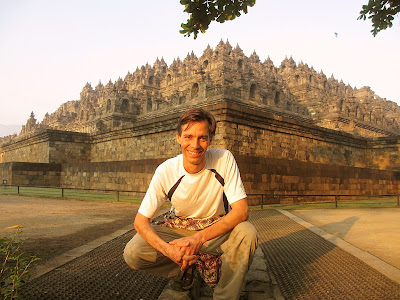 Welcome to Java, Indonesia. Java is the most populous island in the world, and it has the most volcanoes of any island in the world. Given that combination, it's no surprise that the Javanese have a long history of building temples in hopes of convincing a higher power to spare the Javanese from volcanic eruptions.  We visited the two most famous ancient temples in Java: Borobudur and Prambanan. 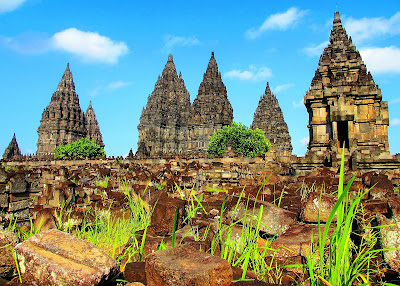 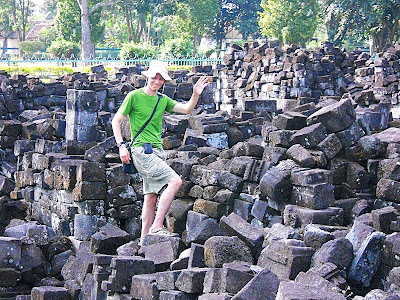 Prambanan is a large Hindu temple complex which was built in the 9th century AD. After surviving for centuries, the complex suffered extensive damage in an earthquake in 2006, leaving many of the 50 temple sites as piles of rubble. 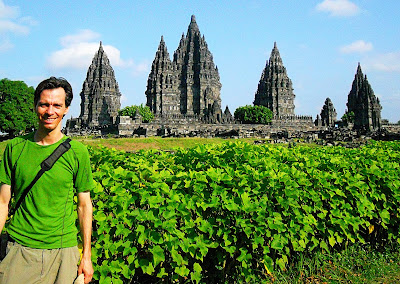 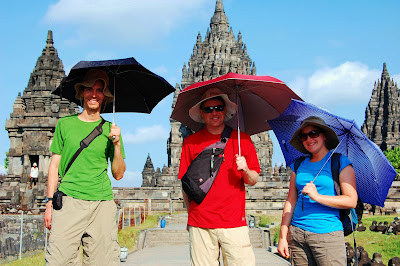 One thing that is not always apparent in my photos is the temperature. For instance, during our visit to Prambanan, the air was humid and the temperatures were in the mid-90's. At least three of us had hats and umbrellas to shade us from the unrelenting sun. Nick, who is taking this photo, lives more dangerously without hat or umbrella. 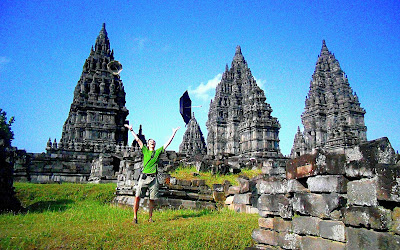 For a moment, Nick talked me into throwing caution to the wind. 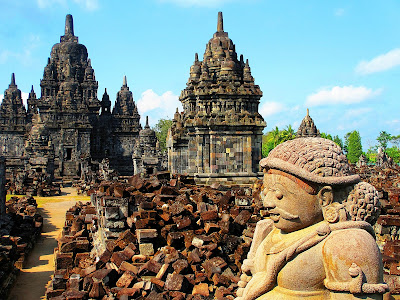 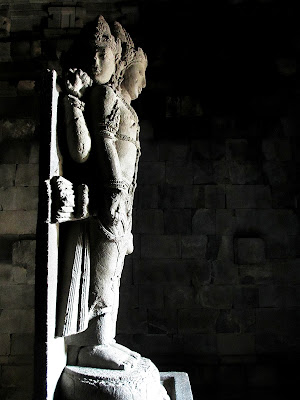 Inside each of the temples of Prambanan are statues dedicated to various Hindu deities. 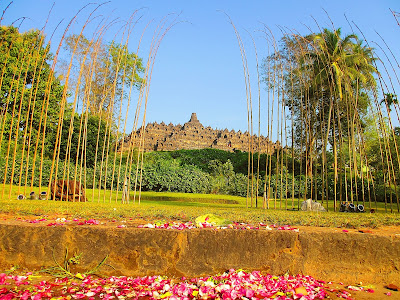 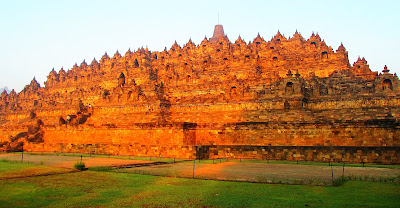 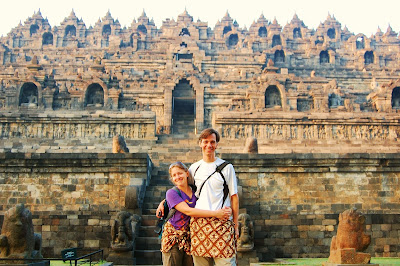 After visiting Prambanan, we moved on to the largest temple in the world, Borobudur. Whereas Prambanan is Hindu, Borobudur is a Buddhist temple. The temple, which was built in the 9th century AD, consists of six square bases topped by three circular ones. 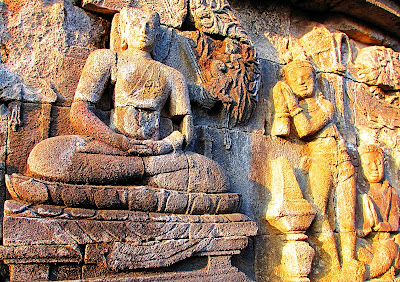 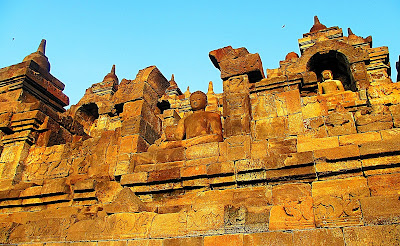 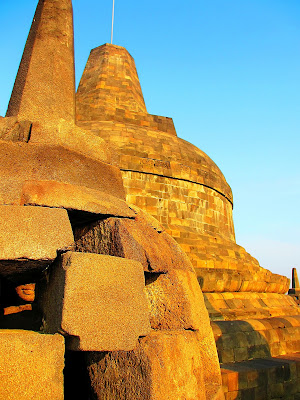 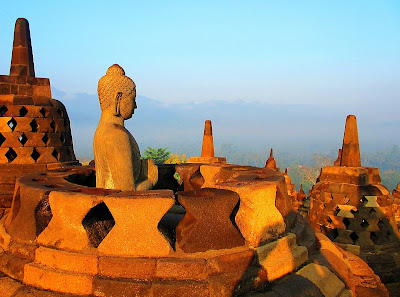 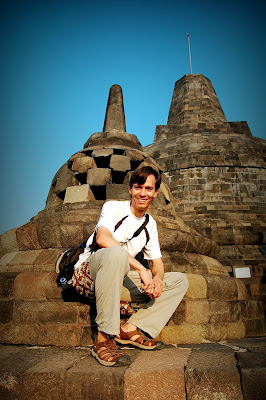 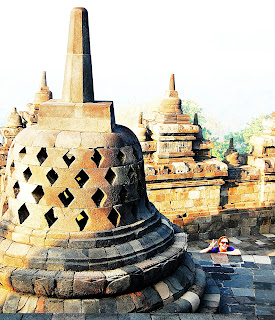 We visited Borobudur just after sunrise, and for awhile, we had the world's largest temple all to ourselves. 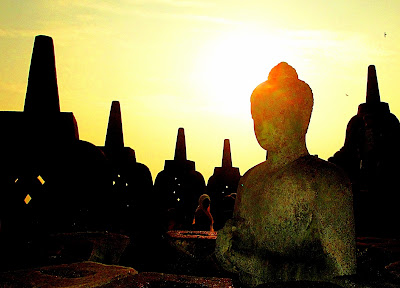 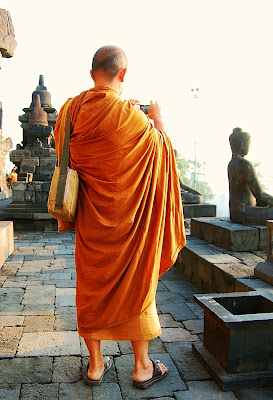 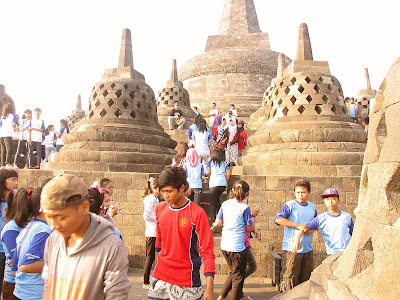 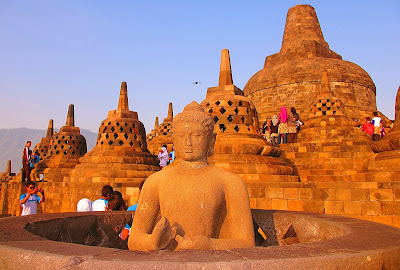 But as the sun rose, the school groups and other domestic tourists began to arrive in droves. 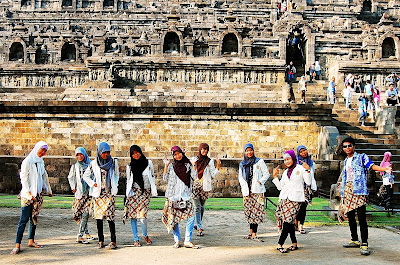 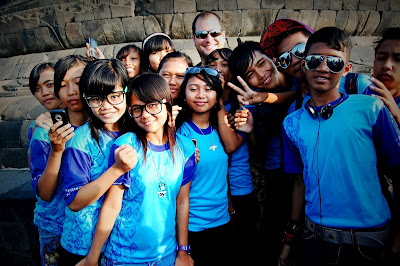 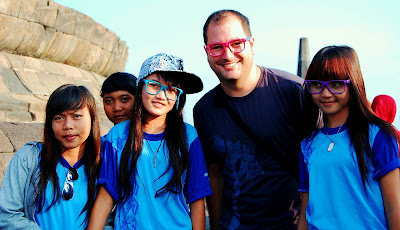 Throughout our travels in Southeast Asia, we have been asked by locals to pose for photos with them.  This happened over and over again at Borobudur.  A popular fad among Javanese teenagers is wearing brightly-colored glasses frames without lenses.  Above, you can see Nick looking like a Javanese teenager.

At one point atop Borobudur, I was taking a video of Beth posing for photos with some local tourists; when I also was asked to pose for photos.  The resulting video gives a nice glimpse of our crazy but fun time on Borobudur after the other tourists arrived.  It is this kind of unexpected experience which makes travel such a pleasure.
Posted by Jason at 6:00 AM

Email ThisBlogThis!Share to TwitterShare to FacebookShare to Pinterest
Labels: Indonesia