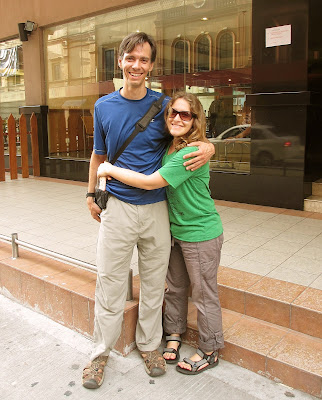 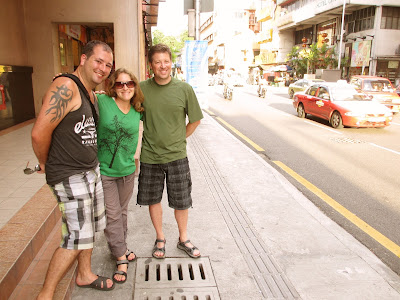 Six years ago, Shane, Nick and I were waiting for a bus on a street in Kuala Lumpur, the largest city in Malaysia.  While I looked for a place for us to eat breakfast, Shane and Nick stayed behind to watch our bags, which were piled on the sidewalk beside the bus stop.  I was inside a hotel, asking a clerk for a restaurant recommendation when Shane and Nick entered the hotel lobby, without any of our bags.  I asked them where our bags were, and Nick responded, "We left them with a girl we met on the street."  Aghast, I stormed out of the hotel, expecting to see our bags disappearing in the distance.  Instead, I met Beth.


Above is a video of Beth recalling how we met. 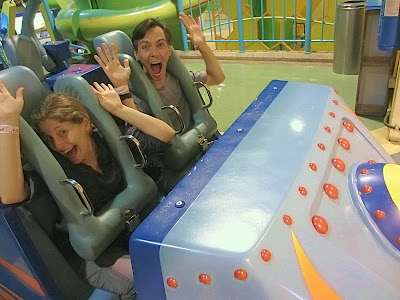 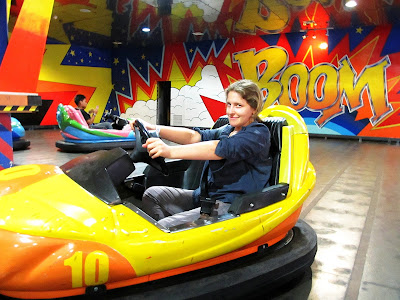 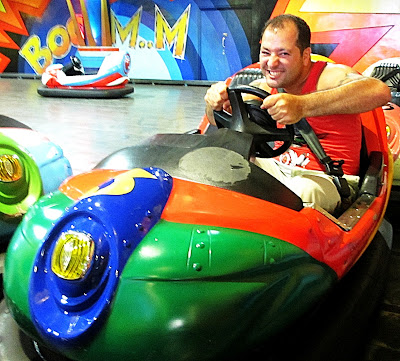 While we enjoyed all of the roller coasters, we especially enjoyed the bumper cars.  I suspect this is because for the past few months, we have been forced to be passengers to some of the craziest bus & taxi drivers you will ever see.  When we were finally allowed behind the wheel, we employed some of our newly-learned unsafe driving techniques. 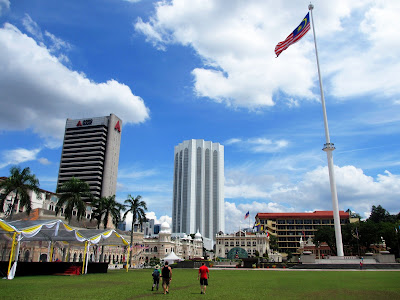 Even though we had previously been to Kuala Lumpur, we again set out to explore the city. 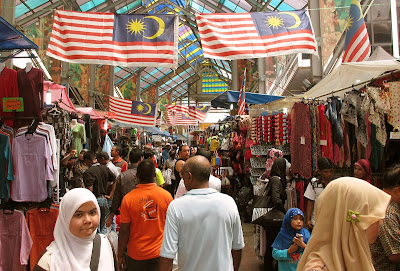 Kuala Lumpur, like seemingly all large Southeast Asian cities, features some bustling markets.  Above is a video taken during a walk through a portion of the Petaling Street night market.  During the day, this street is a busy roadway, filled with cars, buses and motorbikes.  Each night, the street is closed to traffic, and the pictured stalls are erected. 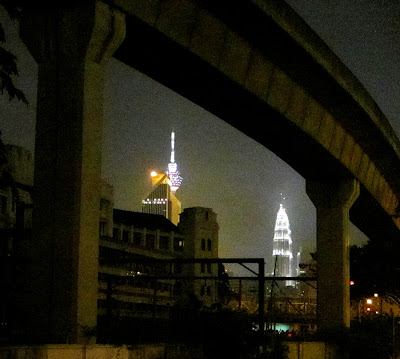 The most famous sight in Kuala Lumpur are the twin towers known as the Petronas Towers, which were the tallest buildings in the world from 1998 to 2004, and which are prominently featured in the Sean Connery/Catherine Zeta-Jones movie, Entrapment.  Since we have already visited the twin towers (pictured on the right of the above photo) and the neighboring Kuala Lumpur Tower (pictured on the left, and appearing to be taller because it is closer), the above photo is the closest we came to the twin towers.  This photo was taken when I was walking home from a movie theater alone after midnight.  The skytrain had stopped running for the night, and I followed the skytrain tracks (pictured above) for a mile or so until I came to our hotel.  My journey took me through a homeless encampment under a highway overpass, which, though certainly ill-advised, did offer a fascinating glimpse of a part of the city not often seen by tourists. 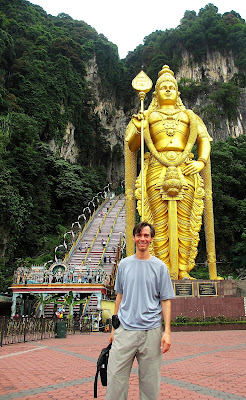 Beth and I visited a more popular Kuala Lumpur sight, the Batu Caves.  The caves feature a shrine and temples dedicated to the Hindu deity, Lord Murugan, and it is one of the most popular Hindu shrines outside of India. 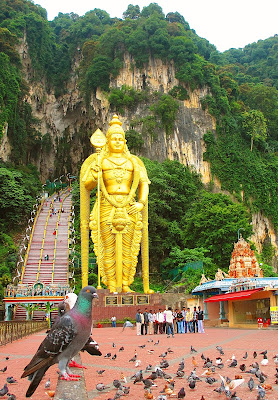 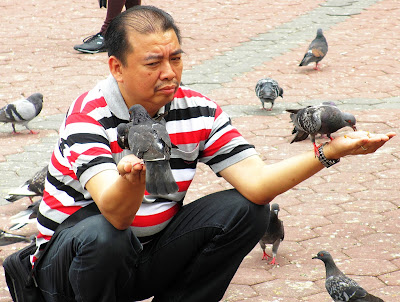 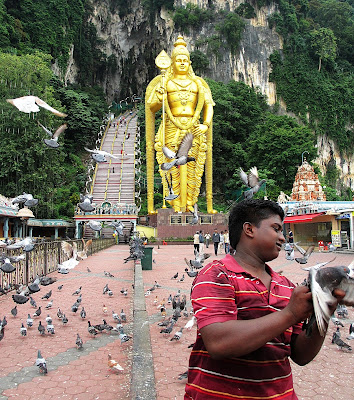 Perhaps pigeons are fans of the Lord Murugan, because hundreds of them congregate by his statue.  We noticed a number of tourists handling the pigeons, either by enticing them with food or by grabbing them by surprise, as pictured above.  While I have no qualms about walking through homeless encampments at midnight, there was no way I was going to grab a pigeon. 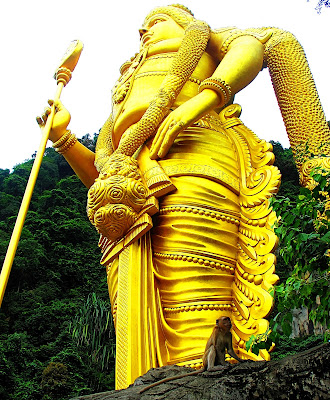 Not only do pigeons congregate by Lord Murugan's statue, but scores of monkeys do as well. 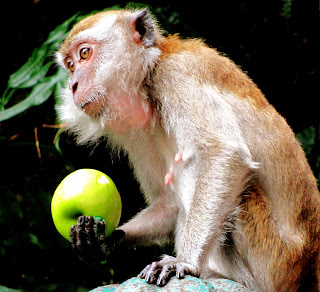 What is reason why the monkeys hang around Lord Murugan?  People feed them.  Above is a theatrically-inclined monkey showing his appreciation for the gift of an apple by doing his version of Hamlet. 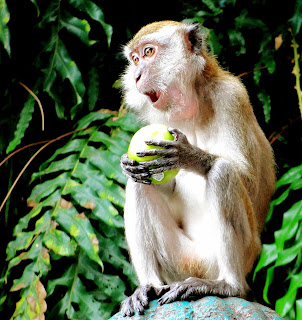 Here is his version of Home Alone. 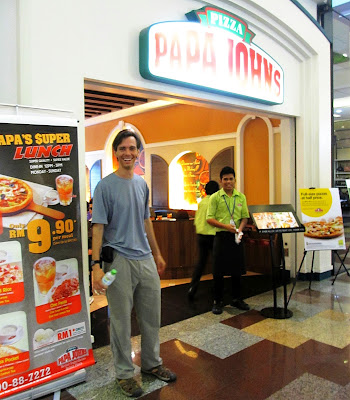 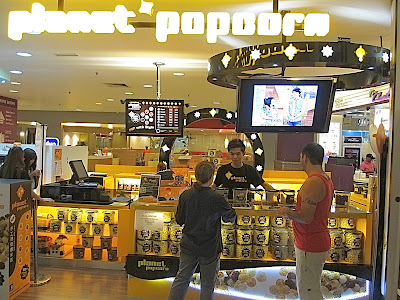 When traveling for an extended period of time, the sight of something familiar can be just as welcome as something exotic.  However, often even what seems to be familiar can have an unexpected twist.  For instance, at Papa John's pizza restaurant in Kuala Lumpur, don't expect to find any pork products, such as pepperoni or ham; Malaysia is a Muslim country.  And, for reasons I don't understand, I could not find salted or buttered popcorn in Malaysia: not at any movie theater, and not at any of the dozen popcorn kiosks I saw, including this "Planet Popcorn," which features 10 distinct flavors--all of which are sweet. 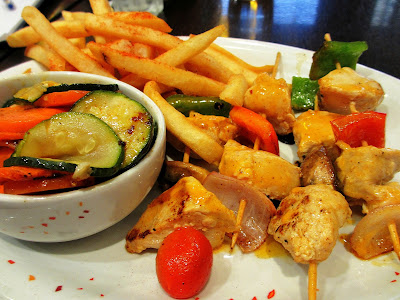 One familiar sight which was exactly at I expected was Nando's Restaurant, which is a South African grilled chicken restaurant chain that is popular in Kuala Lumpur.  Above is one of many meals I ate at Nando's during our short time in the city.  Nando's would win my vote for "favorite restaurant chain which has no locations in any city where I have lived."  (I realize I may be the only person to have ever voted on such a thing.)