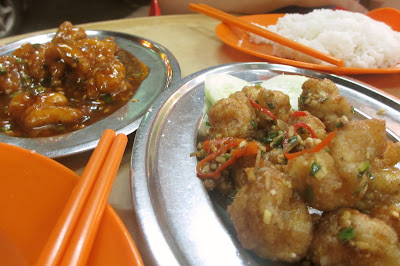 We came to Borneo for the nature--which did not disappoint--but we also enjoyed the food.  Click the link to read about our culinary experiences in Borneo. 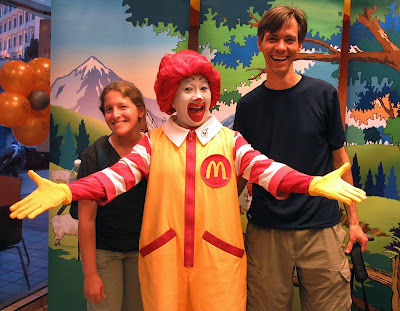 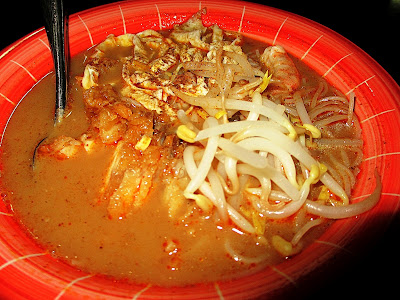 Above is a photo of arguably the most popular local food in Malaysian Borneo: Laksa.  Laksa is a spicy noodle soup, usually served with seafood or chicken, egg and bean sprouts.  The above serving of Laksa, which was tasty, was purchased at a sidewalk food stall for less than $1. 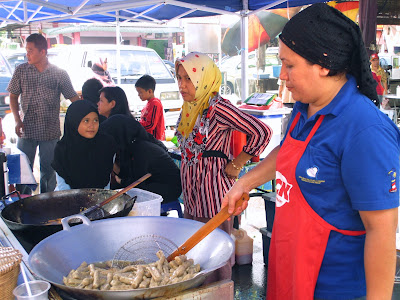 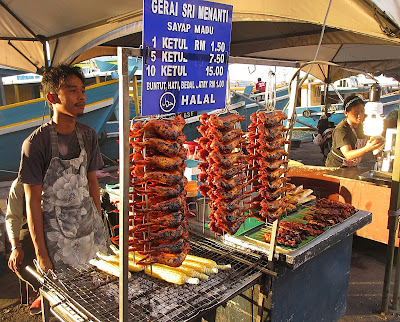 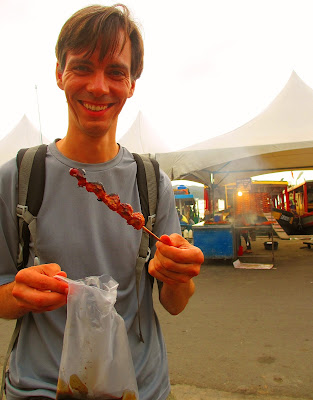 Street food was plentiful in the cities of Borneo, and it was delicious. 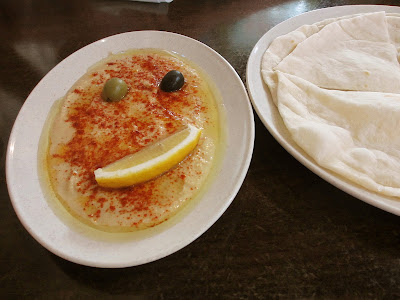 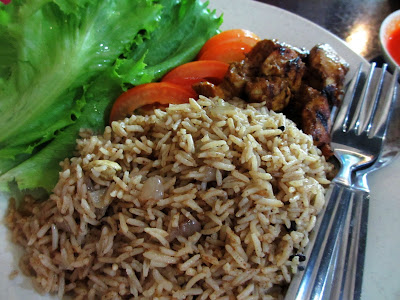 In the city of Kuching, we ate at two Middle-Eastern restaurants.  The photos above show a plate of hummus, and a plate of rice with vibrant spices (including cardamom and cinnamon) reminiscent of what we tasted on the "spice island" of Zanzibar.


As you can hear in the above video, no matter what ethnicity inspired the food in the restaurant, we invariably heard American light rock from the 1980's.  Sometimes it seemed like we were in a time warp to when Michael Jackson, Phil Collins, Billy Joel, John Mellencamp, etc. ruled the airwaves. 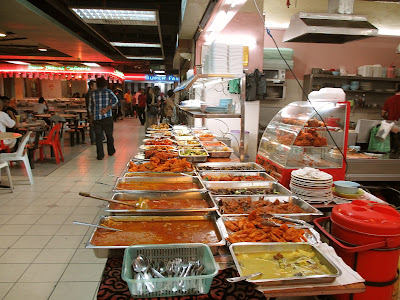 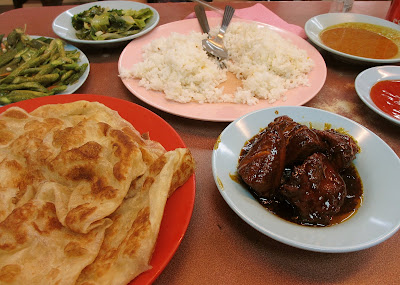 One of our favorite "restaurants" was the above-pictured Indian food stall in a large food court.  The doughy bread pictured above is called roti, and it was always served fresh and hot.  The rest of the food was rotated throughout the day in the buffet pictured above.  Beth always ate whatever was on the buffet.  I would initially pretend not to be hungry, and then wait until something fresh was brought out, and then I would pretend that my appetite suddenly materialized and I would serve myself a dish of whatever was fresh.  After a few visits to the restaurant, one of the employees figured out my game, and he would alert me to what was fresh.  The above meal was less than $2 and was delicious. 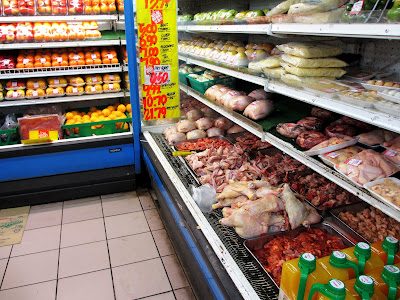 We decided to check out the local grocery store in Kota Kinabalu to buy some fruit, but I was a little turned off by the fact that the uncovered (and smelly) meat was kept within a foot or two of the fresh fruit. 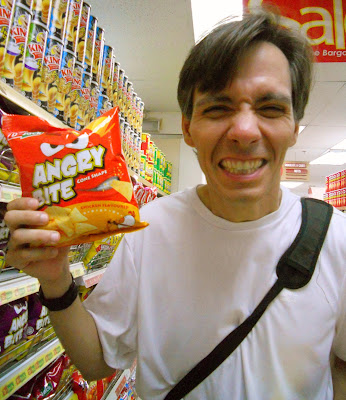 Of course, every grocery store has a chip aisle.  Here are chips sponsored by the popular game, Angry Birds.  I am amazed by how we have seen Angry Birds merchandise (shoes, shirts, hats, balloons, etc.) in every place we have visited. 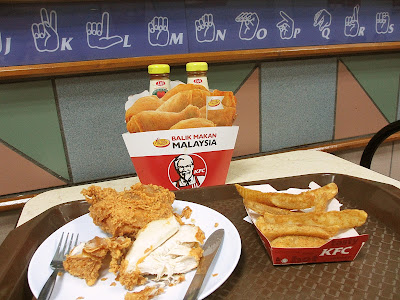 Seeing the uncovered poultry in the grocery store made me want to visit a familiar face in the poultry business: Colonel Sanders.  Notice the sign language alphabet in the above photo?  At this KFC in Kota Kinabalu, every employee is deaf.  It was amazing how efficient (and quiet) this KFC was; all orders are made by pointing to a series of menu cards, and the employees were incredibly friendly and attentive, without ever saying a word. 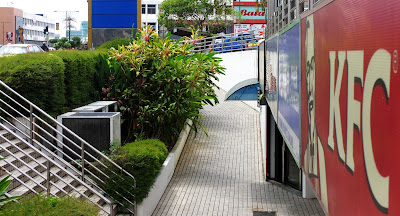 KFC is by far the American fast-food chain we have seen the most on our trip so far.  And Borneo has taken the prize for most KFCs in one destination.  Look at the far upper left and far right of the above photo, and you'll see signs for two different KFCs situated less than a block apart in the city of Kuching.  In Kota Kinabalu, we counted six separate KFCs over the course of a 15-minute walk.  Two of those six were open 24 hours a day.  People in Borneo really love the Colonel's 11 herbs and spices! 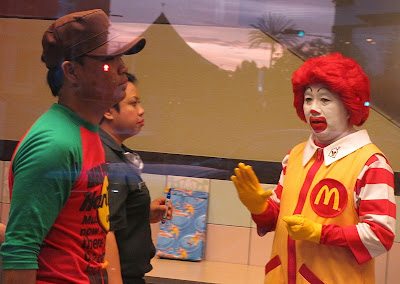 KFC is not the only American fast food in Borneo.  We passed this McDonald's in Kuching one night, and heard someone yelling angrily.  We looked over, and saw the person yelling was none other than Ronald McDonald himself!  From what we could gather, Ronald only had in his contract that he would pose for photos for three hours, and Ronald was outraged that he been posing for photos for almost three hours and fifteen minutes, and the restaurant had the nerve to ask him to continue posing for a few more photos. 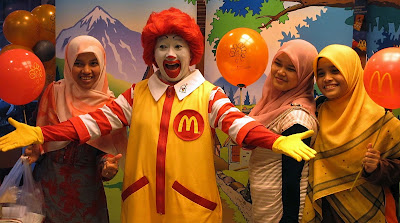 Although Ronald was clearly very angry, like all great prima-donna artists, Ronald knew how to turn on the magic when the camera came out. 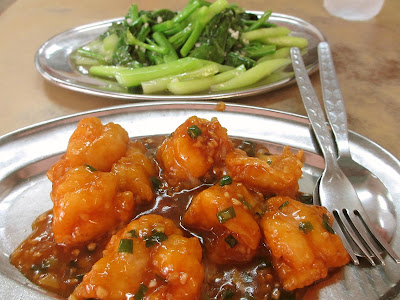 Borneo is an island, so it is not surprising that our favorite meals on Borneo were seafood dishes, such as the above-pictured shrimp dishes. 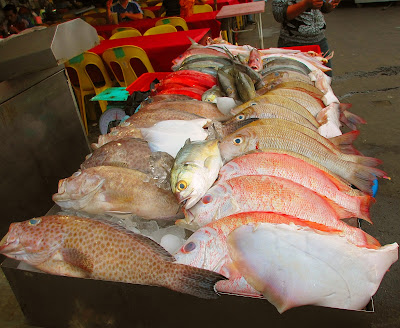 In Kota Kinabalu, there was a night seafood market were you stand a few yards from the fishing boat, select your fish, and watch it be grilled from your seat. 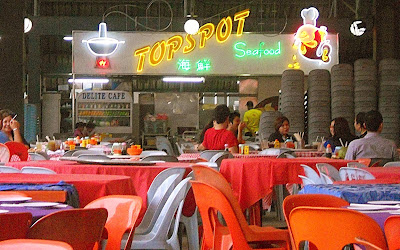 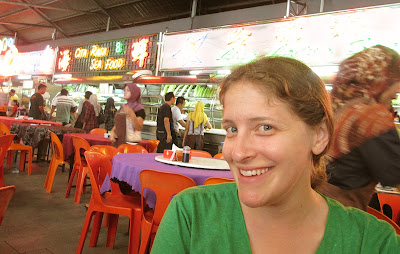 Perhaps our favorite restaurant so far on the trip was the Top Spot Seafood restaurant in Kuching.  Top Spot is only open in the evenings, and by around 7:00 pm (usually when we were leaving), all 300 seats in the place would be full, and a line would have formed for the next available seats. 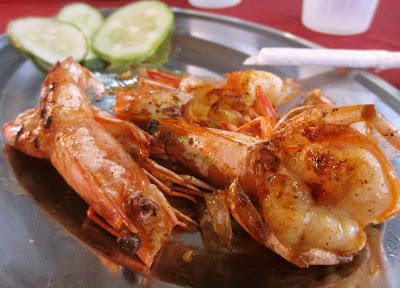 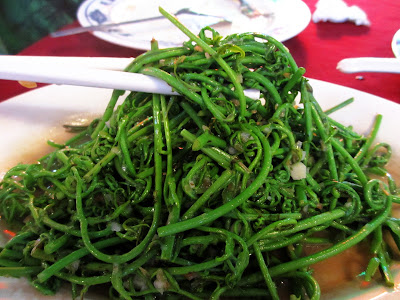 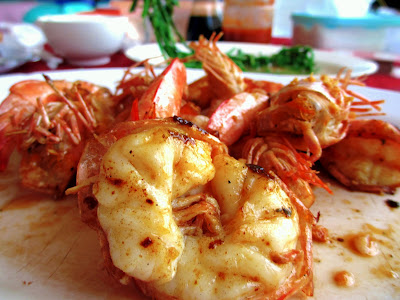 We ate at Top Spot four times, and each time we ordered the grilled prawns and the local fern (known as "midin"), as well as some other options for variety's sake.  Both Beth and I agreed that the freshly-caught prawns, soaked in a buttery sauce, were maybe the best prawns or shrimp we've every eaten.  Given the throngs of people who come to this place every night, clearly we're not alone in our assessment. 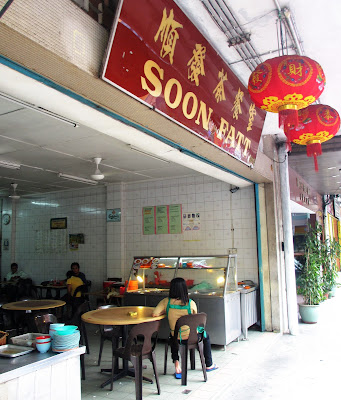 Perhaps it's good that we left Borneo when we did.  Had I continued eating Borneo's delicious, buttery food for much longer, I might have lived up to the name of the restaurant pictured above: "Soon Fatt."
Posted by Jason at 6:00 AM

Email ThisBlogThis!Share to TwitterShare to FacebookShare to Pinterest
Labels: Malaysia