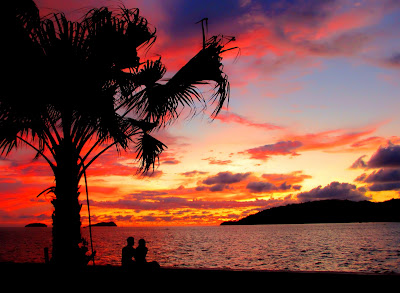 We visited Sarawak and Sabah in the Malaysian Borneo.  My previous post focused on Sarawak.  Click the link to read about how we found paradise in Sabah. 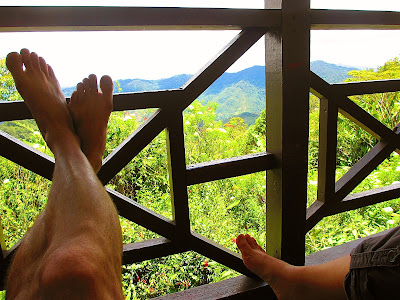 During our two-week visit to Borneo (which includes Brunei, as well as Sarawak and Sabah), we took six flights on Air Asia. The total cost of those six flights was $300.  Air Asia, which is based in Malaysia and primarily services Asia, boosts the world's lowest operating costs and has won Skytrax's award for the world's best low-cost airline in four of the past five years.  We had no problems on any of our flights. 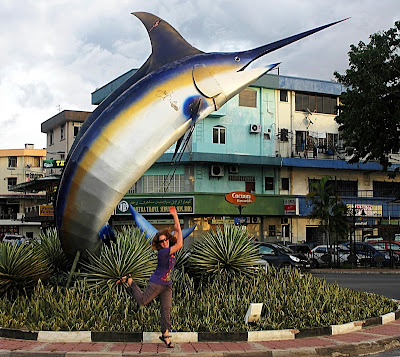 The capital of Sabah is Kota Kinabalu, which is a major fishing center.  We enjoyed eating a lot of delicious seafood, but that will be the subject of my next blog post.  However, we did head out to the surrounding islands and to view--rather than eat--a wide variety of ocean-dwelling critters. 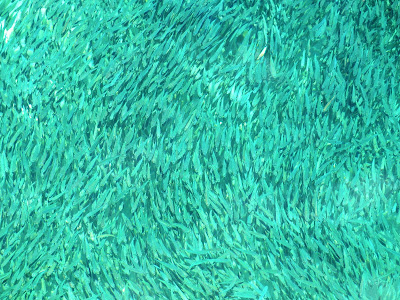 I do not have an underwater camera, so I don't have photos of most of the fish we saw while snorkeling on Sapi Island.  However, the water was so clear, and the fish so plentiful, that the fish could be photographed from above the water.  Above is a photo of a large school of fish. 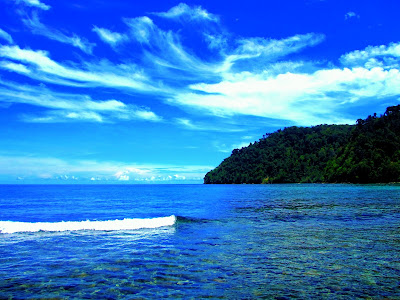 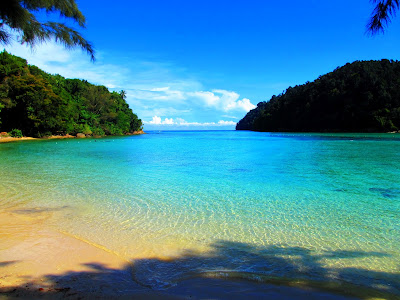 We hiked around the entire island.  Above are two photos taken on two sides of the beautiful island.  There also is a video taken on a trail in the middle of the island. 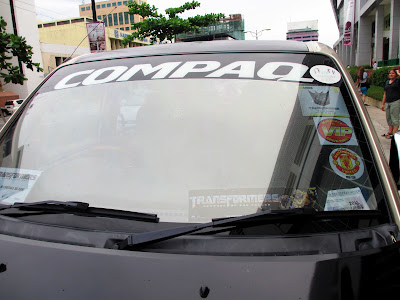 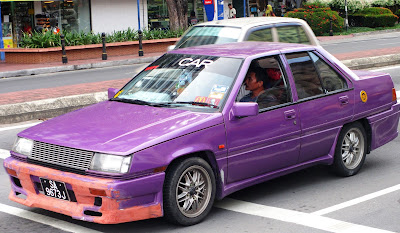 Upon returning to the mainland, we explored the town of Kota Kinabalu.  Compared to the other places we've been in Southeast Asia, we found the traffic to be much more like what you find in the United States.  The roads are filled with cars, rather than the hordes of motorbikes and bicycles found elsewhere in Southeast Asia, and the cars generally obey the traffic laws (most notably, they actually stop at traffic lights).  Most cars sported stickers on their windshields; the stickers usually promoted some U.S.-based company or product, such as the stickers shown in the photos above.  I'm not sure what is the point of the windshield sticker that simply says, "CAR", but you can see McDonald's and KFC stickers on the driver's side of the windshield. 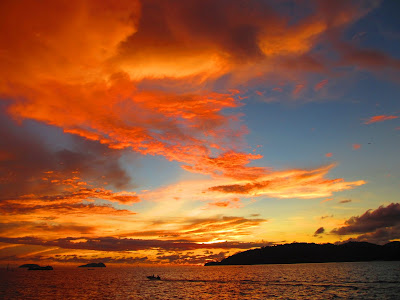 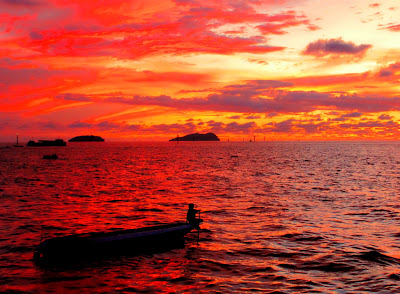 Every night in Kota Kinabalu featured a beautiful sunset. 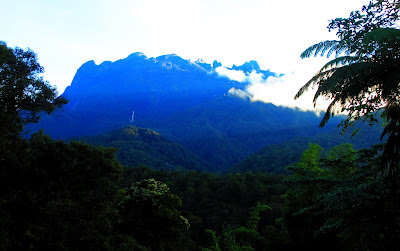 We pulled ourselves away from Kota Kinabalu and headed up to the rooftop of Borneo, Mount Kinabalu.  We came to this towering hunk of granite with the primary purpose of me climbing the mountain. 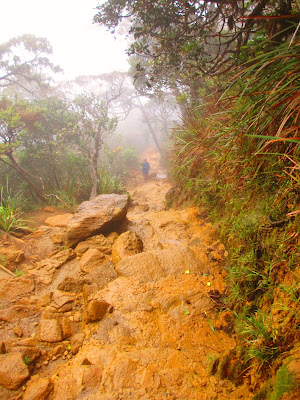 I decided to climb the 13,000-foot mountain, which features a seven-mile trail to the summit, in a single day.  Although seven miles may not sound like much, virtually every step of the trail is uphill.  Not only is the trail unrelentingly uphill, but I had to negotiate various obstacles, including slippery stones, blinding humidity, and slow-paced fellow climbers who looked to be in such pain that I could only imagine that their doctors probably would faint if they knew their patients were climbing a mountain. 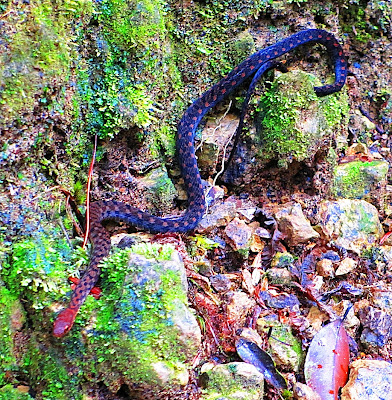 One obstacle I definitely avoided were the snakes on the trail.  I guess if you're walking through paradise, you have to expect snakes.  Just ask Adam and Eve. 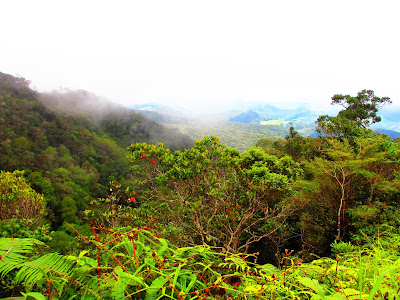 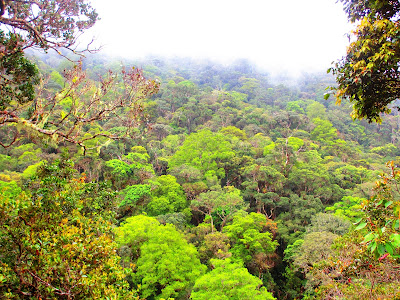 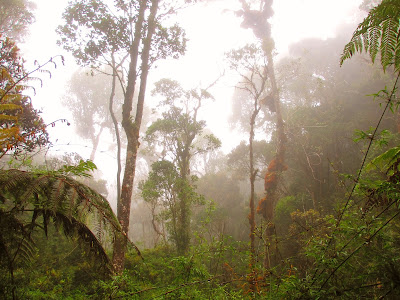 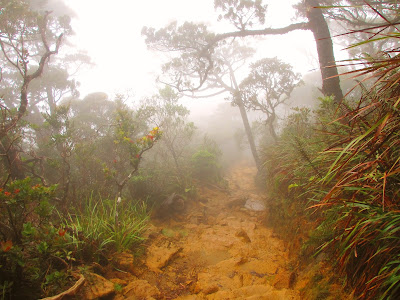 One obstacle that couldn't be avoided was the weather, which steadily worsened as I climbed.  The mist rolled in, and then the rain followed.  Although I was deprived of the stunning panoramas that traditionally accompany a hike up a mountain, I was treated to eerily-beautiful views of mist-covered trees. 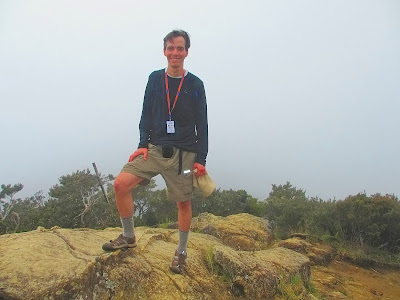 As I finally neared the top, the rain started, a park ranger forced me to turn around and descend due to fears of lightning. 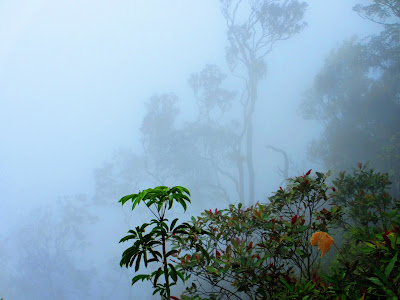 As I descended, the mist became even thicker, and the above photo shows the constant view. 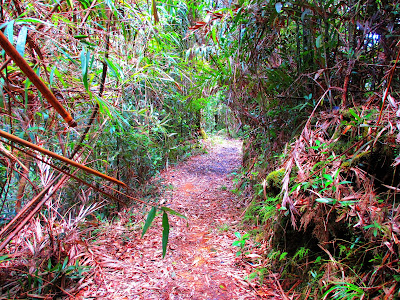 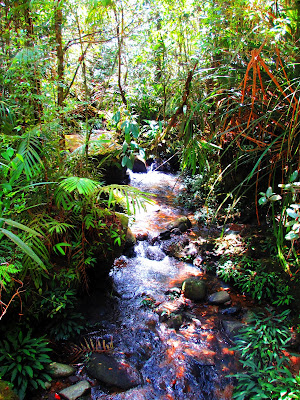 The next day, I hit the empty jungle trails at the lower elevations of the national park, and I found some lovely sights, more impressive than what I saw on the crowded trail up the mountain. 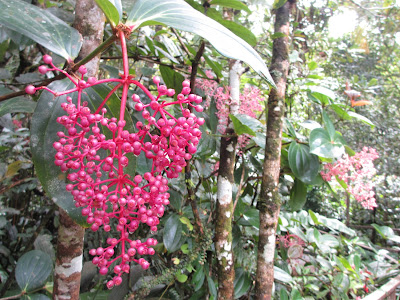 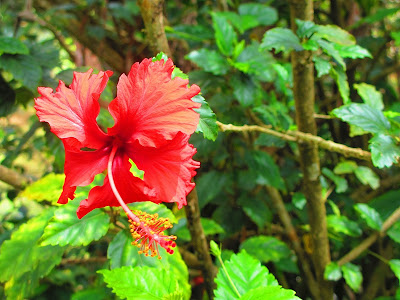 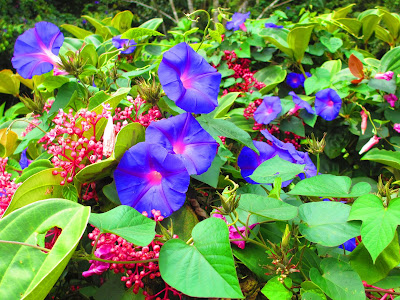 I was particularly impressed with the amazing array of colorful flowers which seemed to greet me at every turn. 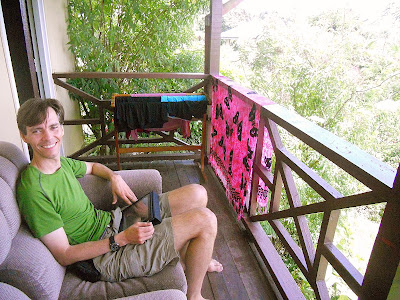 After all the hiking, I rested my legs for a couple of days on the porch of our peaceful mountain villa hotel.  Because we were in the mountains, the temperatures were in the 70's, instead of the 90's or higher which is typical everywhere else in Borneo. 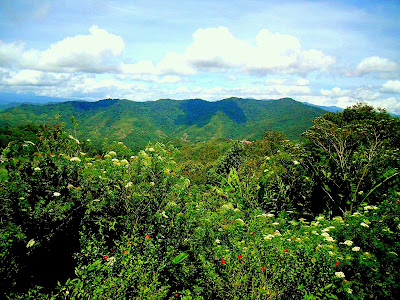 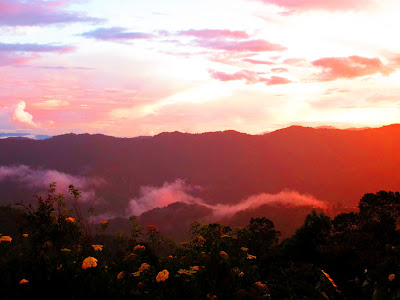 The above photos show the view from our porch.  We enjoyed the view, and we also enjoyed the time to read.  We each read two novels during our two days of relaxation.  We had no internet at our hotel, which at first seemed like a negative.  But we ended up appreciating the chance to unplug from the virtual world.

And as we relaxed on our porch, listening to the sounds of nature and enjoying the cool temperatures, it dawned on me that sometimes you don't have to break a sweat to find paradise.
Posted by Jason at 6:00 AM

Email ThisBlogThis!Share to TwitterShare to FacebookShare to Pinterest
Labels: Malaysia