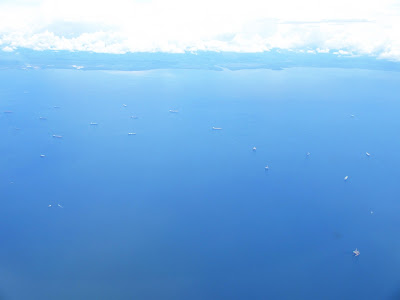 When you look out of the window as the plane approaches Brunei, it is immediately apparent that the country engages in a lot of offshore oil drilling.  The above photo and video shows the many oil drilling rigs and tankers in the sea just offshore of Brunei. 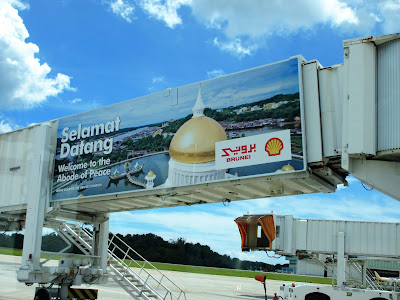 When the plane taxis to the gate, it is apparent which oil company has been given the exclusive lease to drill for oil in Brunei.  Brunei is often referred to as a "Shell-fare State," because of the riches Shell provides to the citizens of Brunei in exchange for the drilling rights to Brunei's vast oil reserves.  Citizens are guaranteed an income and free education and healthcare (including education and healthcare overseas); they receive subsidized housing and food; and they pay no income or capital gains taxes.  Brunei was listed as the fifth richest nation in the world in 2012 by Forbes with a per capita annual income of $48,000 (Qatar is the richest nation in the world, thanks to oil revenues; the United States is the seventh richest nation).  The gas prices in Brunei are the lowest in the world (about a dollar a gallon when we were there), and the only gas stations in the country are Shell stations.  Brunei has the highest level of per capita car ownership in the world.  Not surprisingly, there is little in the way of public transport in the country; when we asked our hotel about taking a bus to a far away museum, she looked at us like we were crazy.

The richest person in Brunei, and one of the richest in the world, is the Sultan of Brunei.  The above photos show the Sultan's private residence, first from the plane, and second from a boat on the nearby river.  This is the largest private residence in the world, over four times bigger than the palace at Versailles in France.  The residence has over 2000 rooms and 260 bathrooms.  The Sultan owns 110 cars, 7 planes and 2 helicopters.  One of his planes is the most expensive plane in the world, a 747 worth over $100 million mainly thanks to the gold inlays throughout the interior of the plane.

During each night of the month of Ramadan, the Sultan invites anyone of any religion into his house for dinner.  After dinner, each guest shakes hands with either the Sultan or his wife and is given five Brunei dollars (about $4).  It wasn't Ramadan during our visit, so we weren't let in the gates of the Sultan's house, and no one gave us money for appearing. 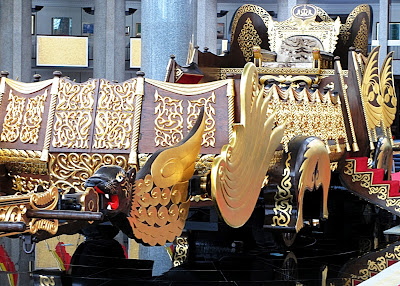 We visited the Royal Regalia Museum, which displays various ornate jewels and gifts received by the Sultan during his reign.  Photos are only allowed in the lobby, which features a recreation of the scene at the Sultan's coronation.  Perhaps thanks to the prosperity of the populace, the Sultan remains very popular in Brunei, and his rule has been unchallenged. 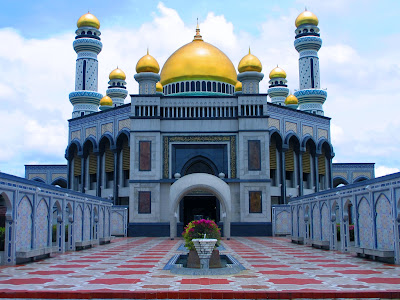 This is the largest mosque in the country, and it was purportedly designed by the Sultan himself (I'm guessing he might have had a little assistance from a trained architect).  The Sultan goes to this mosque every week. 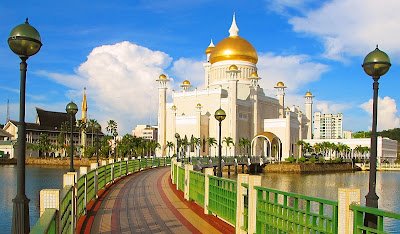 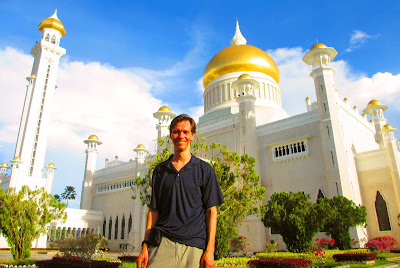 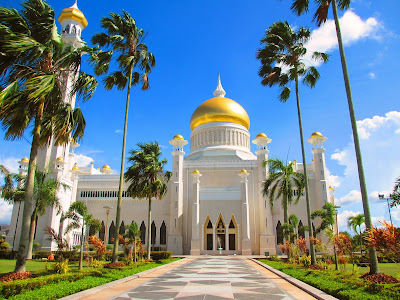 The above photos show the second largest mosque in the country, which is named after the Sultan's father. 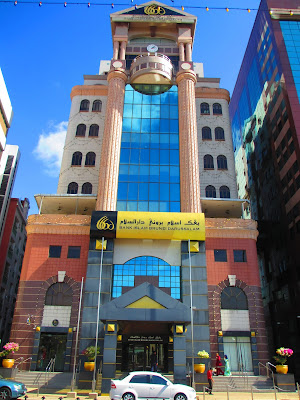 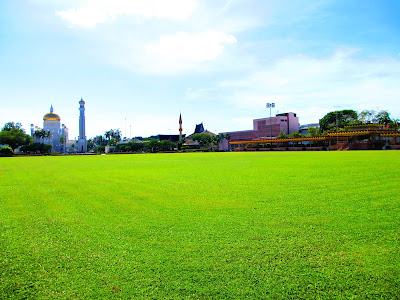 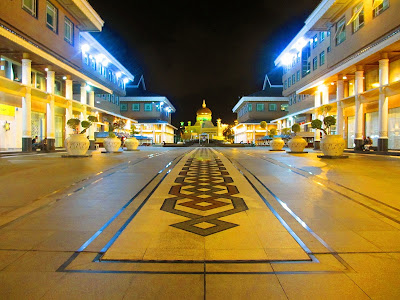 You may have noticed that in my photos there are very few pedestrians visible.  Above is a photo of the busiest shopping mall in the country, which had a decent-sized crowd inside.  Because everyone owns cars (and gas costs $1 a gallon), the underground parking garages are full of cars, but no one seems to step outside. 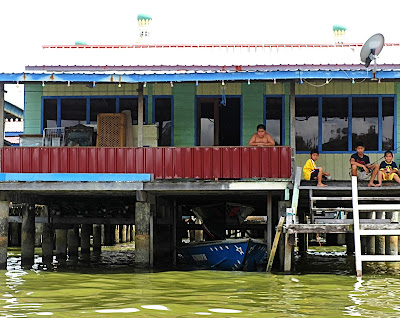 Despite the wealth of the citizens of Brunei, over 20,000 of them choose to live in traditional stilt houses in the world's largest water village.  The above video shows us on a water taxi, going through a small portion of the immense water village.  Although the houses don't look like much, seemingly every house had a satellite dish on top and air conditioning units in the windows. 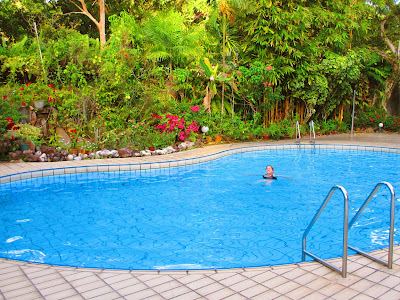 We decided to splurge a little (like a Sultan might) and stay at a nicer hotel with a pool.  When in Brunei, do as the Bruneins do.... 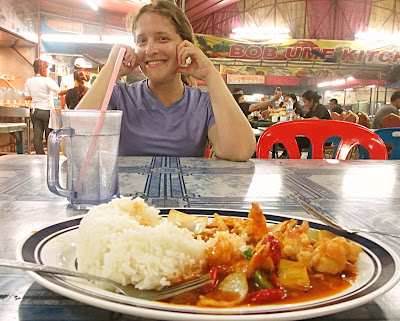 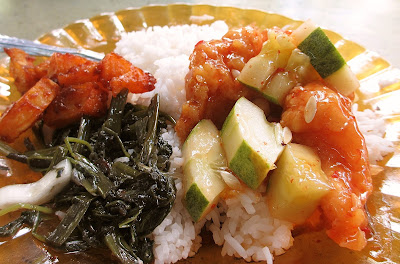 We found the food in Brunei to be among the least expensive on our trip (perhaps because of the food subsidies).  The above meal of fresh-caught seafood--which was delicious--cost around 70 cents. 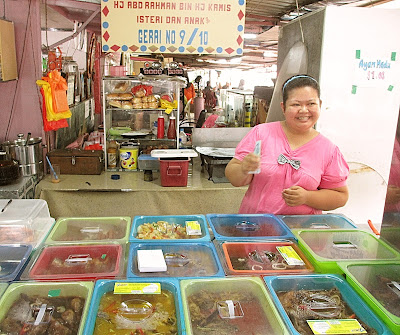 The people we met during our time in Brunei were very friendly.  Even in one of the richest oil-producing nations, its citizens are its most precious natural resource.
Posted by Jason at 12:42 AM

Really loving your blog!! You are experiencing some amazing things! The photos are just gorgeous.

I'm quite jealous, although it certainly inspires me to plan more trips :)

Thank you, Amy! We're having a great time. Soon we'll be heading to India for five weeks; Beth just told me to invite you & Steve to join us if you have the time!

That would be awesome but we are out of leave due to our trip to Thailand :-) However, we're heading to South Dakota in September and are debating next year's trip(s)!

Thank you for your blog. My husband and I are listening to the true story by Jillian Lauren "Some Girls" about her 18 months as a member of the Sultan's family harem. We were curious about this country and wondered if the Sultan was generous to his country folk or just kept the riches for his family. Your blog helped us understand what the country is like. Thank you

Thank you for your comment, Theresa. I'm happy if the blog helped give you a little background on Brunei. Brunei was a fascinating country to visit. Thanks again.