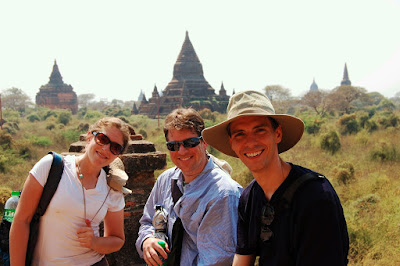 Welcome to the ancient city of Bagan, which features 4,400 temples spread over a 24-mile plain.  These temples range between 800 and 1,000 years old, which made me feel almost young by comparison.  Click the link to see the photos of our visit to the temples of Bagan, Myanmar (aka Burma). 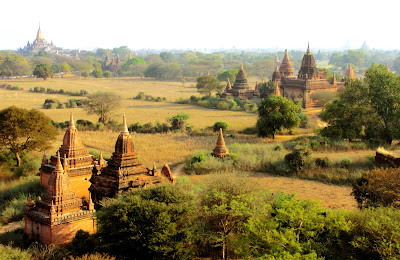 Bagan was born when Burma's King Anawrahta unified the country, embrace Buddhism, and started building Buddhist temples.  He and his successors really threw themselves into the job of temple-building, and 200 years later, they had built over 13,000 temples in the 24-mile plain.  They were not as diligent about maintaining their army, so when Kublai Khan's army marched into Burma, the kingdom fell, and the temples of Bagan were largely abandoned.  Over the ensuing centuries, most of the temples were lost to earthquakes, wars and neglect.  Recently however, a new army has invaded Bagan: an army of tourists. 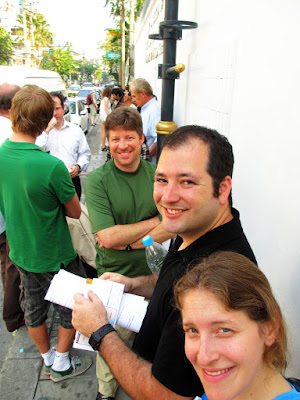 Our "invasion" of Burma began at the Burmese embassy in Bangkok, Thailand, where we spent a morning waiting in line for our visa.  After a couple of flights and lot of red tape, we arrived in Myanmar.

There are no ATMs in the entire country, and credit cards are not accepted anywhere, so we had to carry a brick of cash with us.  Here, Beth counts her wad of local currency at the money-changer office.  Next, we took a flight to Bagan. 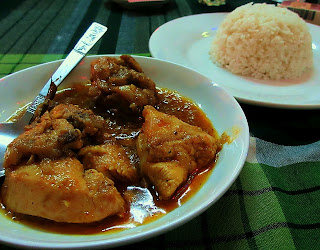 A temple-explorer needs food, and we found some delicious food in Bagan.  This local variety of chicken curry was my favorite meal in the country.  With fuel in our bellies, we made our way to a temple for a sunset view.

It turns out we weren't alone.  Despite all of the effort required to get to Bagan, the temple we chose for sunset was full of tourists.

Here is the scene at the top of the temple as photographers have staked out their positions for sunset photos.  Nick is visible on the upper level, in an orange shirt, focusing his lens.  See my earlier post, "Burma Awakening," for more info and photos related to the sudden influx of tourists in Burma. 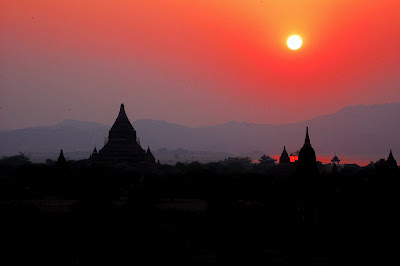 Here is one of Nick's sunset photos, showing a few temples and the river in the background.

Here is a video of the scene at the top of the temple. 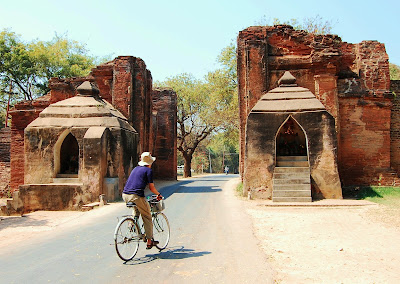 We spent three days in Bagan, and we quickly learned that if you rent bicycles and hit the road on your own, it is easy to avoid the tourists. 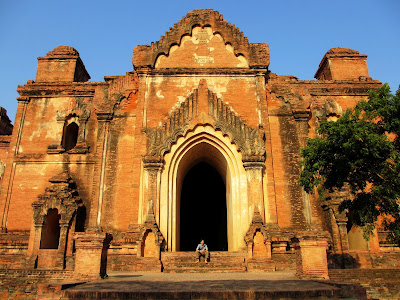 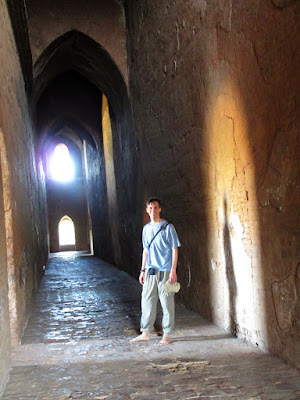 We visited some incredible temples, which we were able to explore all by ourselves. 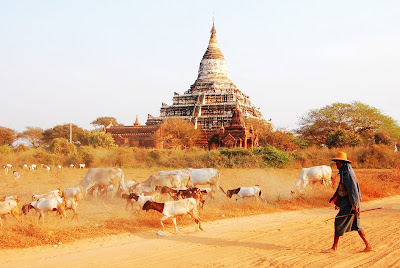 We had company at some temples, but the company was mostly of the four-legged variety.

Here is a video of a walk around the upper level of one of the temples in Bagan.  Notice the temples visible from all sides in all directions. 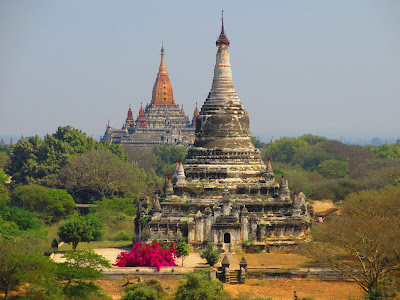 It boggles the mind to think of what this same space looked like 800 years ago, when there were over three times as many temples, all newly-constructed, gleaming in the sun as far as the eye can see.  Even today, vestiges of Bagan's former splendor remain, and make for a fun and awe-inspiring experience.
Posted by Jason at 1:05 AM

Email ThisBlogThis!Share to TwitterShare to FacebookShare to Pinterest
Labels: Myanmar