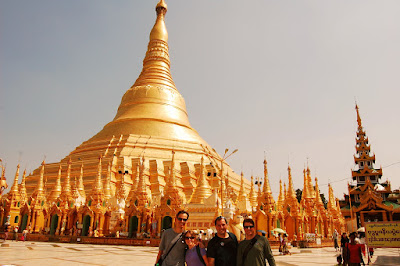 Burma (also known as Myanmar) is filled with beautiful Buddhist temples.  We were fortunate enough to visit during the most important festival in the country, at the largest temple in the country and the oldest pagoda in the world, the Shwedagon Pagoda.  The festival marks the anniversary of Buddha's enlightenment (2,600 years ago this year), and this is the first time the government has allowed the festival in 20 years.  Reportedly, there were six million visitors at the Shwedagon Pagoda during the two-week festival.  We were among those visitors.  Click the link to see the videos and photos.

According to tradition, the Shwedagon Pagoda has existed for more than 2,500 years, making it the oldest pagoda in the world.  According to tradition, the Pagoda contains eight hairs of the Buddha.  The Pagoda has long been the holiest site in Burma, and the site of the most important festival in the country, marking the anniversary of Buddha's enlightenment.  Because the ruling military junta forbade any large public gatherings, the festival had been banned for 20 years.  To the locals we met, the fact that this festival has been allowed to happen this year is the surest sign that real change is happening in Burma.  The mass celebration and prayers of hundreds of thousands of Burmese was a wonder to behold. 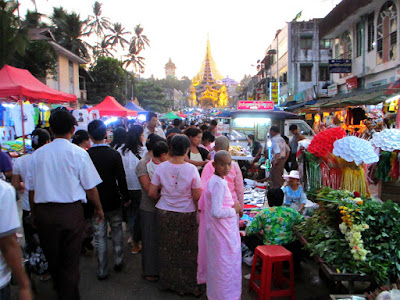 Above is a photo taken as we approach Shwedagon Pagoda, visible in the distance.  The Pagoda has four major entrances, and each entrance was packed with a steady stream of visitors everyday for two weeks.

Above is a video showing us approaching the Shwedagon Pagoda near dusk.

Here is a video of us about 20 minutes later, as we climb the many flights of stairs to the main temple complex.  It is around this time that everyone must take off their shoes, and keep them off during the remainder of the visit to the Pagoda. 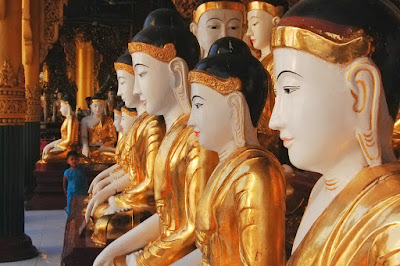 The Pagoda contains over a thousand Buddha images in hundreds of temples, rooms and alcoves.  In some of the rooms, the Buddha statues outnumbered the people. 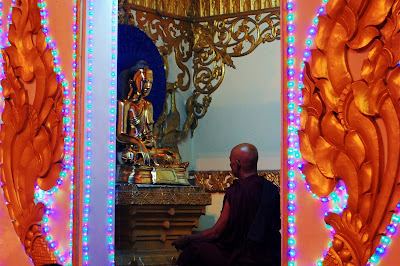 Under the golden roof pictured above sits a monk who is chanting into a microphone.  He is one of 12 monks who took turns chanting 24 hours a day for the entire 14-day festival.  These are such esteemed monks that other monks take their photo.

Videos are better suited to demonstrating the experience of the festival.

The above video begins with a stray cat who wandered in the Pagoda, and who clearly did not enjoy the festival as much as the throng of people.

Shwedagon Pagoda is plated in gold, contains 3,154 gold bells, and has 4,351 diamonds scattered throughout its 326-foot frame.  The largest diamonds are near the top, including a 76-carat diamond.  In the above video, I attempt to capture how the color of one of the diamonds near the top changes as the viewer moves.

In the above video, a family takes turns fanning a large statue of the Buddha.  (A family that fans together, stands together?)  I have uploaded to Youtube more videos taken during our visit to Shwedagon Pagoda.  If you're interested, check them out on the "JourneyWithJason" channel. 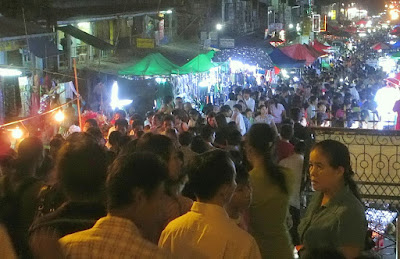 Here is a photo taken about ten minutes after we exited the Pagoda.  It took a lot more walking before the crowds thinned a bit.

Above is a video taken after we had walked away from the Pagoda for around 20 minutes.  Notice the big smile on the face of the woman behind the counter at the beginning of the video.  That is the kind of look we encountered with wonderful frequency in Burma.﻿
Posted by Jason at 10:21 PM

Email ThisBlogThis!Share to TwitterShare to FacebookShare to Pinterest
Labels: Burma