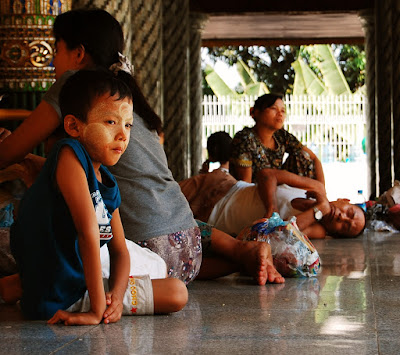 In the early 1900's, Rangoon, Burma's capital, had an infrastructure on par with London at the time.  Now, Burma (or Myanmar) has roughly the same population of Thailand, but only 6% of Thailand's electrical capacity.  However, after decades of economic and social progress being stunted by a repressive military junta, Burma is awaking from its long slumber.  As we saw during our visit, changes are coming fast to Burma--for better and for worse.  Click the link to read more.


When we first landed in Yangon, the largest city in Burma (or Myanmar), our taxi driver and his friend told us all about the recent reforms in their country.  They told us about how, during the past year, the military relinquished control of the government in favor of a civilian regime.  They told us about how Burma's leading pro-democracy advocate (and Nobel Peace Prize winner), Aung San Suu Kyi, had been released after 15 years of imprisonment.  They told us that, in December 2011, Hillary Clinton visited the country, which marked the first visit to Burma by a U.S. official in over 50 years.  Most astonishingly, they criticized the former miliary rulers.  Just a couple of years ago, such comments would have landed these guys in prison.  Now, we heard criticism of the government from many locals, without glances over their shoulders or hushed voices.  Above this paragraph is a video clip of our driver discussing Hillary Clinton's visit and Aung San Suu Kyi's release.

Above is a clip where our driver and his friend joke about the government's forming of a new city in 2005 to be the country's capital, in an apparent effort to keep the country isolated from the outside world.  Our driver concludes by saying that "we are being ruled by a stone-aged mind."  Such comments would never be heard a couple of years ago. 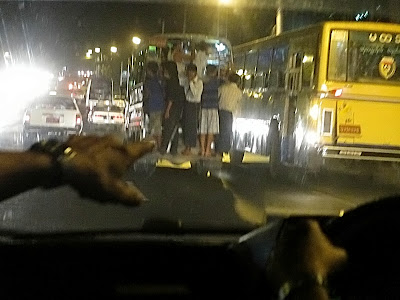 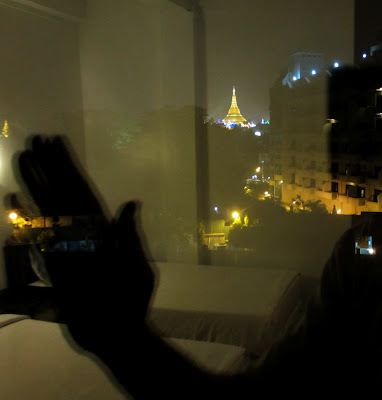 Hillary Clinton's visit to Burma brought a wave of tourists that outstripped the country's tourism infrastructure.  Since Clinton's visit in December 2011, hotels and flights have been fully booked, and prices have skyrocketed.  I booked our hotel in Yangon in November 2011 for $29 a night.  Now, the same room is booked every night far in advance for $79 a night.  The view from the hotel room is pictured above.  The room was nothing special, but the view of the fantastic Shwedagon Pagoda was very nice.  (My next post will feature our experiences at that pagoda.)

One side note: virtually every English-speaker we met in Burma brought up Hillary Clinton, whose recent well-publicized visit marked a turning point in Burma's relationship with the West.  But when we mentioned her husband, Bill Clinton, we were met with blank stares.  The people we spoke with had not heard of Bill Clinton.  We asked if they had heard of George Bush.  Nope.  Either Burma was very isolated, or American presidents are not as famous as we like to think!

Many hours after we arrived in Yangon, we came across a group of tourists who had been on the same plane as us, and had arrived without hotel reservations.  They were still walking the streets, carrying all of their bags, going from hotel to hotel, trying to find a place with room.  Later, I read an article saying that some tourists who arrived without reservations were being forced to sleep on the floors of Buddhist monasteries, because there were no hotels with rooms.  Below is a video I took moments before we encountered the unfortunate group of homeless tourists.

Imagine walking these streets as a homeless foreigner, tired from a long journey, and with dimming prospects of finding a decent place to sleep that night. 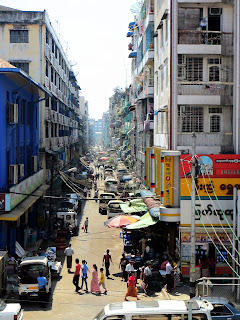 Above is a typical street in Yangon during the day. 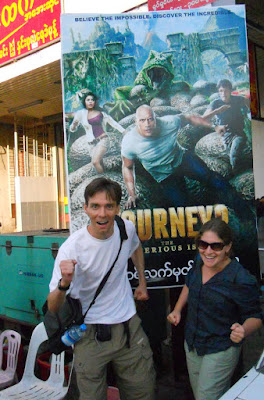 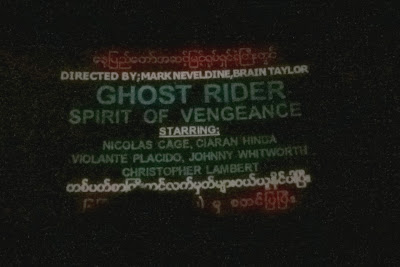 One of my favorite things to do when visiting a new country is to attend a movie.  The "coming attractions" before the film consist of a single overhead-projector slide, such as that pictured above.  After the coming attractions and some commercials, everyone stood for the national flag.  Then the movie started, which was a Hollywood movie in English, Journey 2: The Mysterious Island.  (It's not recommended, but it was the only show in town.)  There were no Burmese subtitles, despite the fact that most Burmese don't speak English.  Not surprisingly, no one laughed at the verbal jokes, but the audience roared with laughter at every physical gag.  Throughout the movie, there was a cacophany of loud cracks which made hearing the dialogue difficult.  As we left the theater and saw the piles of sunflower seed shells on the ground, we figured out the explanation for the noise--over a hundred theater-goers were simultaneously cracking sunflower seed shells throughout the movie. 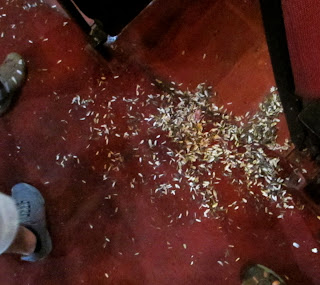 Of course, the daily life of most Burmese involves working, rather than sitting in an air-conditioned theater cracking sunflower seed shells.  Below is a video taken in a workshop above a sprawling market in Burma.

The above video was taken in a market in Yangon (or Rangoon).  Below is a video of a market in the smaller town of Bagan.

While you watch the above video, be thankful that video can't capture smells!
Speaking of smells, below is a photo of my favorite dish I ate in Burma: 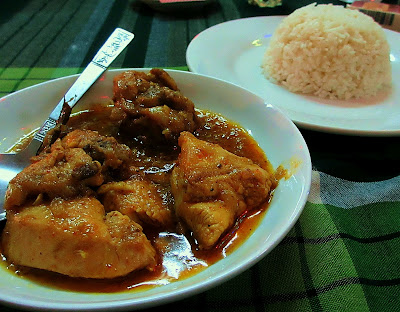 This is a Burmese version of curry chicken, and it was delicious. 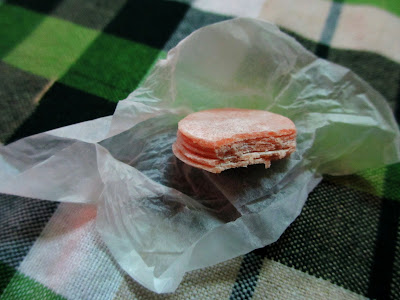 For dessert, restuarants often served a yummy chewy candy made from fresh tamarind.

Finally, above is a video of a kid wearing squeaky shoes--only one of which was working.  We've seen a number of kids wearing these shoes in various countries.  The shoes apparently allow the parents to quickly locate their wandering youngster.  By the time this little fellow gets to be my age, it's a safe bet that his country will look very different than it looks today ... for better, and for worse.
Posted by Jason at 3:32 AM

Email ThisBlogThis!Share to TwitterShare to FacebookShare to Pinterest
Labels: Burma